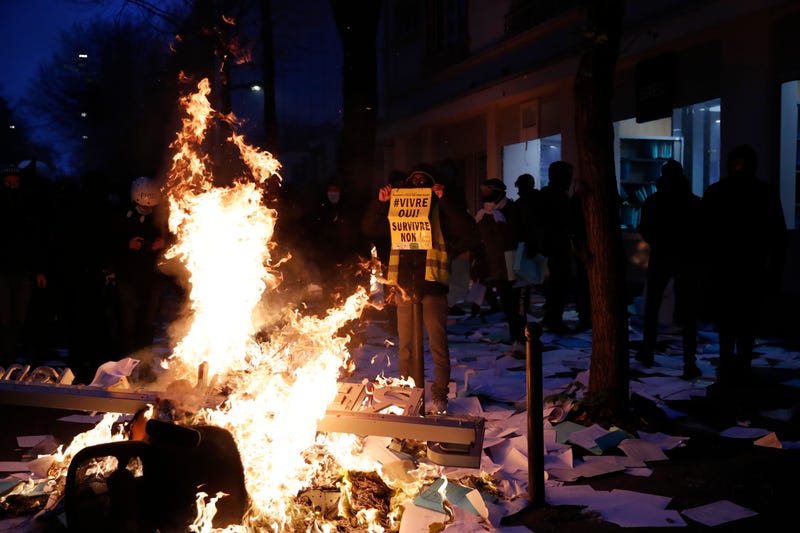 PARIS (AP) — Thousands of people around France protested a proposed bill that could make it more difficult for witnesses to film police officers, with tensions quickly rising at the Paris march Saturday as intruders set fire to several cars, pillaged a bank and tossed objects at police.

The protest-crashers, who disrupted a similar demonstration a week ago, formed a barricade on a section of the march route in eastern Paris, temporarily blocking the march. Dressed in black and known as "black blocs," the aggressive interlopers are a feared element at French demonstrations.

Police officers who have come under fire for alleged racism and gratuitous violence within their ranks, were hard-pressed to stop the individuals seeding chaos at the march by several thousand people.

President Emmanuel Macron triggered anger among police unions during a Friday interview with young French people in which he said that officers with violent behavior and “racist attitudes” must be tracked and sanctioned. Macron announced plans for a online platform the public can use to report and discuss misconduct and acts of bias by police officers.

The Interior Ministry said about 52,350 people demonstrated around France, including 5,000 in Paris.

Interior Minister Gerald Darmanin said at least 64 people were arrested at the protests around France and eight police officers were injured. In a tweet, he praised police for facing down “very violent individuals.”

In the western city of Nantes, two riot police were injured, one of them with a Molotov cocktail, French media reported.

At the Paris march, the people who pillaged the bank along the route tossed furniture tossed into the street and set it on fire as papers went flying. Shop windows were broken, and several cars and at least one motorcycle also were set on fire.

Security forces dodged flying objects or stopped them with their shields. One officer was seen blocking a flaming projectile that appeared to be a Molotov cocktail.

“This is urban violence, not a demonstration,” Bruno Bartocetti, head of the SGP-Police FO union, said on the CNews TV channel.

Saturday’s marches drew a diverse lot of protesters, but was focused on a security bill that includes an article aimed at outlawing the publication of images of police officers with intent to cause them harm. The provision caused such an uproar that the government decided earlier this week to rewrite it.

Critics fear that in its current form, the law could impinge on press freedom and make it more difficult to expose police brutality.

Police misconduct has received fresh attention in France after video footage emerged last month of officers beating up a Black music producer, Michel Zecler. Four of the officers were placed under investigation and two of them jailed.