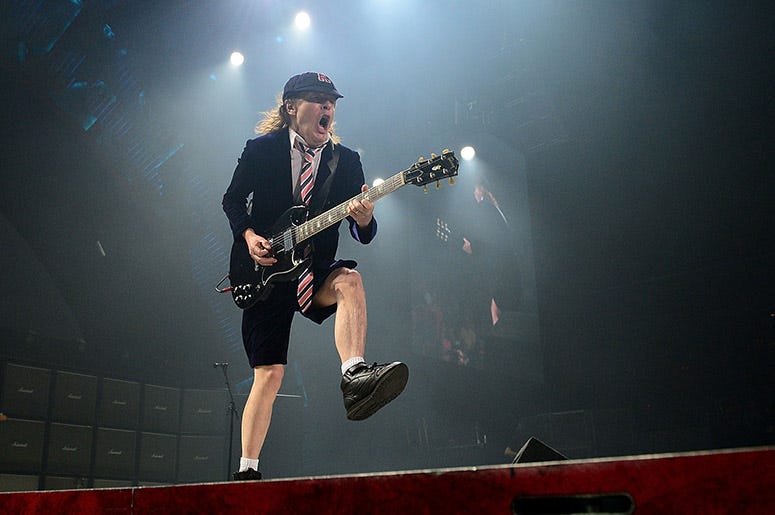 AC/DC are always sure to rock your socks off, but their latest deal with DC Shoes may encourage you to rock with sneakers on.

The group launched a new line of footwear and apparel with the shoe company to promote their upcoming album Power Up, due out November 13. Most of the apparel features classic band logos and action shots of members rocking their faces off.

One canvas shoe features the cover to AC/DC’s iconic 1979 album Highway to Hell. Another pair of fat, matte black skate shoes feature the band’s logo emblazoned along the back heel. There are also beanies, long sleeve shirts and t-shirts that have your favorite rocks doing what they do best; rocking. You can grab some of this merch starting Saturday, November 7.

This is just one arm of band’s promotional octopus leading up to releasing their 17th studio album.

The Rock Gods also shared their official Power Up name generator, complete with "Pwr Up" button and sound effects. Simply enter your name and the electrified machine spits out initials fashioned in the band’s iconic red thunderbolt type. If you’re a fan of slight feedback noises, then just keep pushing that “GENERATE” button!

They also released a music video for the first single off the album, “Shot in The Dark.” High resolution footage captures band members in the throes of rock nirvana, beating their respective instruments to a sonically heroic pulp. Their latest single borrows voices from the group’s past as Brian Johnson, Phil Rudd, and Cliff Williams join Angus Young to reform the band’s Back in Black lineup.