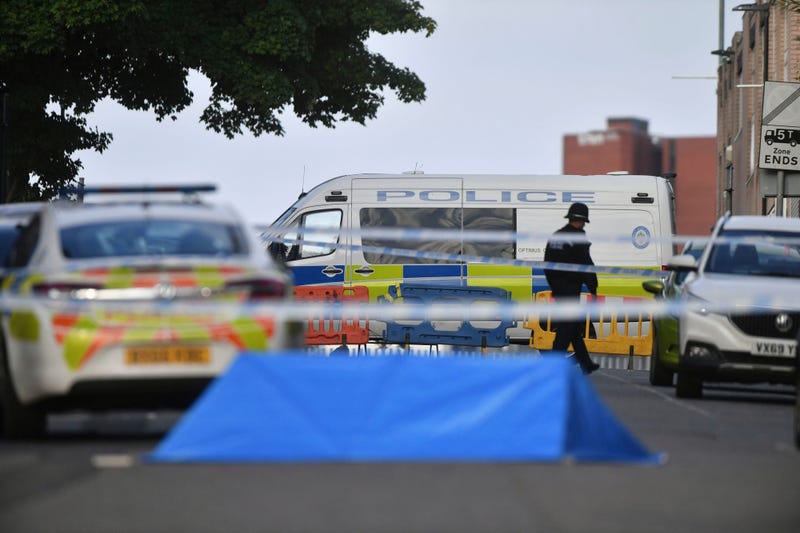 Photo credit A police officer and vehicles are seen at a cordon in Irving Street in Birmingham after a number of people were stabbed in the city centre, Sunday, Sept. 6, 2020. British police say that multiple people have been injured in a series of stabbings in a busy nightlife area of the central England city of Birmingham.(Jacob King/PA via AP)
By The Associated Press

LONDON (AP) — A man was killed and seven people injured in late-night stabbings in a busy nightlife area of the central England city of Birmingham, police said Sunday.

Police said they were searching for a lone male suspect in what appeared to be random attacks.

Chief Superintendent Steve Graham of West Midlands Police said detectives were still investigating the motive but “there is absolutely no suggestion at all that this is terror-related.”

West Midlands Police said officers were called to reports of a stabbing shortly after midnight on Sunday. That was soon followed by reports of other stabbings across the city center over two hours.

Police said they believed the stabbings were linked and have launched a murder investigation.

Graham said two of the seven injured people, a man and a woman, were in critical condition in hospitals. Five others received “relatively minor” injuries.

One of the stabbing sites is in the city's Gay Village, but Graham said there was no suggestion the crime was “motivated by hate.” He also said it did not appear to be gang-related.

Prime Minister Boris Johnson tweeted that it was a “terrible incident” and thanked the emergency services.

West Midlands Mayor Andy Street urged people “to not speculate about the incident” and to “remain calm but vigilant.” Police set up cordons at several sites around the city center, an area full of bars and nightclubs.

Nightlife has been gradually resuming in the city as the U.K. emerges from its coronavirus lockdown.

Cara Curran, a club promoter, said she saw multiple people fighting in the street, though it was unclear whether that was connected to the stabbings.

“It was one group of boys against another group of boys,” she told the BBC, adding that “racial slurs” were being thrown.

Official statistics show knife crime is on the rise in the U.K., where most guns are outlawed, though the number of homicides with blades fell in 2019 from the year before.

Britain has seen several recent extremist knife attacks, including a stabbing rampage in a city park in Reading, near London, in June that killed three people. A Libyan man has been charged.