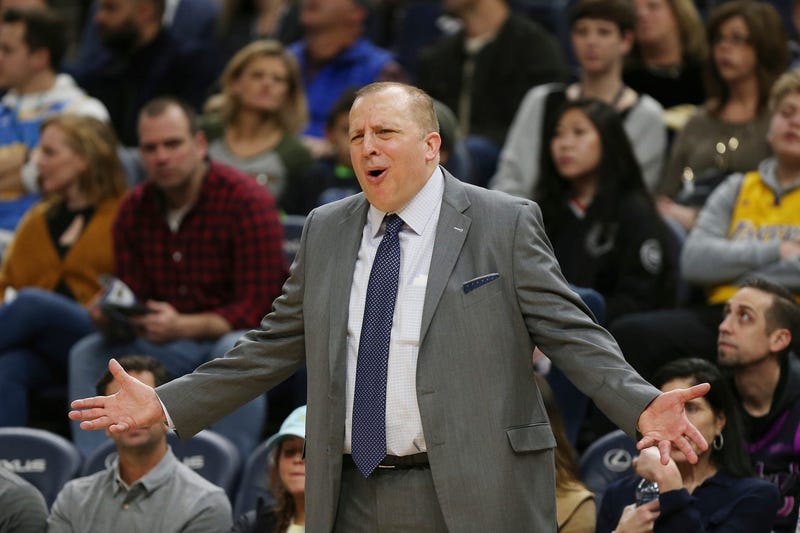 Photo credit FILE - In this Jan. 6, 2019 file photo, Minnesota Timberwolves' head coach Tom Thibodeau calls out to his team during the second half of an NBA basketball game in Minneapolis. A person with knowledge of the details says the New York Knicks are finishing a deal to make Thibodeau their coach. The person told The Associated Press, Saturday, July 25, 2020, that no contract has been signed but a deal is expected to be announced next week, ESPN first reported that the Knicks and Thibodeau were completing a five-year contract.(AP Photo/Stacy Bengs)

NEW YORK (AP) — Tom Thibodeau is coming back to the New York Knicks, who are still seeking the success they enjoyed when he was an assistant two decades ago.

The Knicks are finishing a deal to make Thibodeau their coach, a person with knowledge of the details said Saturday.

No contract has been signed but a deal is expected to be announced next week, the person told The Associated Press, speaking on condition of anonymity because negotiations were ongoing.

ESPN first reported that the Knicks and Thibodeau were completing a five-year contract.

When they do, the 2011 NBA Coach of the Year in Chicago will become the 13th different person to coach the Knicks since Jeff Van Gundy resigned early in the 2001-02 season.

Thibodeau was an assistant under Van Gundy, who led the Knicks to the 1999 NBA Finals and into the postseason in every season he was there. New York has reached the playoffs just three times since Van Gundy's departure.

The Knicks went 21-45 this season, missing the playoffs for a seventh straight year. Mike Miller finished the season as interim coach after David Fizdale was fired 22 games into the season.

New Knicks President Leon Rose then interviewed a number of candidates before choosing Thibodeau from a field that included Jason Kidd, former Brooklyn coach Kenny Atkinson and Miller, who impressed Rose while going 17-27 before the season was suspended in March.

San Antonio assistants Will Hardy and Ime Udoka were also candidates. Spurs coach Gregg Popovich said both will get their opportunities but praised the choice of Thibodeau.

“Tommy’s a seasoned veteran who it goes without saying understands what wins and what loses. He knows how to put a program together, create a culture and be demanding — and at the same time, make people accountable," Popovich said.

“It’s easy to demand things, but to make people accountable and want to play the right way is not something that’s easy for everybody to do. But Tom knows it inside and out and he’ll be a great choice to organize the situation there, develop a plan, start the culture, stick to it, be persistent and get after it. So it’s a great choice.”

Thibodeau is regarded as a demanding coach who is one of the top defensive minds in the game. He devised the defense that carried the Boston Celtics to the 2008 NBA championship as an assistant before becoming Chicago's coach in 2010.

He guided the Bulls to a 62-20 record as a rookie, the first of five straight postseason berths even as the team battled constant injuries to star guard Derrick Rose and others.

Overall, he is 352-246 as a head coach. He led the Minnesota Timberwolves to the postseason in 2018 but was fired the next year during a rocky season that began with star Jimmy Butler asking to be traded.