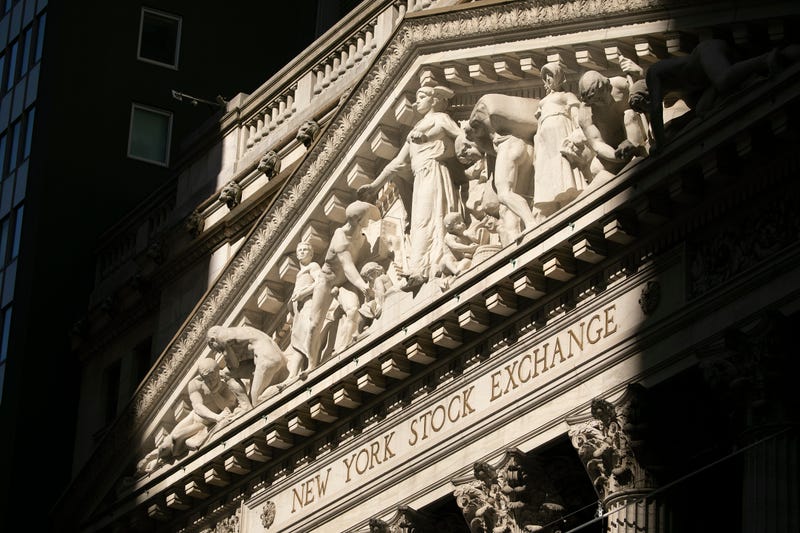 Photo credit FILE - This July 21, 2020 file photo shows The New York Stock Exchange. Stocks are rebounding in early trading on Wall Street Wednesday, Aug. 12, carrying the S&P 500 back toward the cusp of its record high. The benchmark index was up 1% after the first half-hour of trading and on pace for its eighth gain in nine days. (AP Photo/Mark Lennihan, File)

Stocks are extending Wall Street's recent run of gains Tuesday afternoon, despite an early rally losing some of its momentum.

The S&P 500 was up 0.1% after having been up 0.8%. Banks and energy companies led the gains, outweighing losses in technology stocks. The latest gains followed strength in markets overseas as investors welcomed news that European leaders have agreed on a budget and coronavirus relief fund worth more than $2 trillion.

The agreement comes as pressure intensifies on Congress and the White House to reach a deal on another economic aid package before a temporary boost in aid for unemployed Americans expires at the end of the month. Hope for more economic aid from the government, following Europe’s example, helped put investors in a buying mood, said Kristina Hooper, chief global market strategist for Invesco.

“The U.S. does not have the safety net that Europe has,” she said. “This is an environment in which there is going to be a need for more fiscal stimulus or you could see real hit to consumers.”

Investors also have their eye on the latest batch of quarterly report cards from companies. Coca-Cola and Philip Morris International rose after the companies reported earnings in the latest quarter that beat analysts’ forecasts.

The Dow Jones Industrial Average was up 172 points, or 0.7%, to 26,852. The Nasdaq was down 0.7% a day after notching its best day since the end of April and its latest all-time high. Small company stocks were faring better than the rest of the market. The Russell 2000 index climbed 1.3%.

Treasury yields were mostly lower, continuing to reflect caution in the market.

Energy companies were the biggest gainers among the 11 sectors in the S&P 500, by far, as the price of oil headed higher, an encouraging sign that markets hope economies will continue to recover. Occidental Petroleum led all other stocks in the S&P 500, vaulting more than 10%. More than a dozen other energy companies also moved sharply higher.

Technology stocks and companies that rely on consumer spending, sectors that are up the most this year, gave up some of their gains after powering a rally a day earlier.

The rise in financial, energy and industrial stocks is a reversal in the market’s prevailing trend since the pandemic struck, which has been to favor companies that benefit from Americans largely stuck at home and increasingly relying upon technology, digital communication and e-commerce.

After following up a 20% drop in the first three months of the year with a nearly 20% gain over the April-June quarter, Wall Street has continued its winning ways so far in July. The S&P 500 has notched a weekly gain the past three weeks as investors cheered improvements in hiring, retail sales and other parts of the economy, along with rising hopes for a COVID-19 vaccine.

The Federal Reserve's efforts to support markets and expectations that Washington will deliver more financial aid to help Americans weather the economic downturn have been key in keeping markets mostly pushing higher since stocks plunged in March.

The overall S&P 500 index has rallied back to within 3% of its record set in February and is back to where it was in early June.

Still, worries remain that the rise of coronavirus counts across much of the country will derail efforts to reopen businesses shut down due to the pandemic. That’s why Wall Street is betting on Washington to deliver another trillion-dollar round of economic aid.

“We still have areas of the U.S. that have become hotspots, there are localized lockdowns and we expect the employment landscape will not be able to heal until we have the economy open completely,” Krosby said. “The larger the (aid) package, the more it will continue to cushion the downside ramifications of the epidemic.”

The yield on the 10-year Treasury slipped to 0.59% from 0.61% late Monday. The yield is a benchmark for interest rates on mortgages and other consumer loans.

Stocks in Europe rose broadly after the 27 leaders of European Union countries agreed to a 1.8 trillion-euro ($2.1 trillion) budget and coronavirus recovery fund after one of their longest summits. To cope with the biggest recession in its history, the EU will establish a 750 billion-euro ($858 billion) coronavirus fund, partly based on common borrowing, to be sent as loans and grants to the hardest-hit countries.

That is in addition to the agreement on the seven-year, 1 trillion-euro ($1.14 trillion) EU budget that leaders were haggling over even before the pandemic.