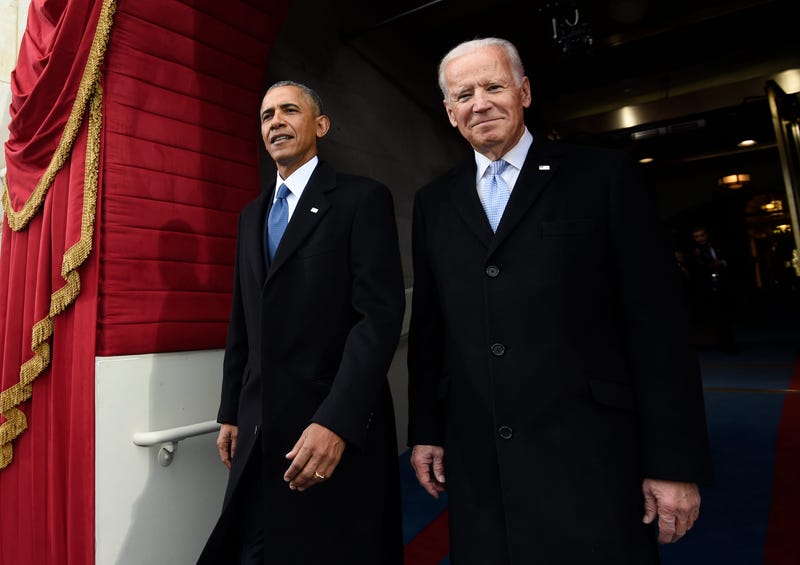 Photo credit FILE - In this Jan. 20, 2017, file photo, President Barack Obama and Vice President Joe Biden arrive for the Presidential Inauguration of Donald Trump at the U.S. Capitol in Washington. 2020 presidential candidate and former Vice President Biden is releasing a video of his first in-person meeting with former President Obama since the coronavirus outbreak began, enlisting the former president to help slam his successor's response to the pandemic. (Saul Loeb/Pool Photo via AP, File)

WASHINGTON (AP) — Joe Biden is releasing a video of his first in-person meeting with Barack Obama since the coronavirus outbreak began, enlisting the former president to help slam his successor's response to the pandemic.

Snippets offered by Biden’s campaign showed the pair wearing masks while arriving at an office, then sitting down well apart from each other to observe social distancing for a bare-faced chat.

The full video will be posted on social media on Thursday, but teasers showed Biden and Obama discussing passing their administration’s signature health care law and blaming Donald Trump for stoking division and animosity among Americans from the moment he entered the 2016 presidential race. They also were sharply critical of the Republican president’s efforts to combat a virus that has killed more than 140,000 Americans.

“Can you imagine standing up when you were president and saying, ‘It’s not my responsibility, I take no responsibility'?” Biden says, offering a line of attack similar to his recent campaign speeches when he asserted that Trump “quit” on the country and has “waved the white flag” amid the pandemic.

“Those words didn’t come out of our mouths while we were in office,” Obama replies.

The former president largely stayed out of the once-crowded Democratic primary but endorsed Biden in April, when he was the last candidate standing. Obama hosted a virtual fundraiser for his former vice president last month that raised $7.6 million, the most of any Biden campaign event so far. He warned then against Democrats becoming “complacent and smug.”

The meeting in the video — and the Biden campaign promoting it to voters — illustrates the larger role Obama is expected to play for the presumptive Democratic presidential nominee in the months before November.

In another excerpt, Biden refers to Trump launching his 2016 campaign at Trump Tower, saying, “He ran by deliberately dividing people from the moment he came down that escalator, and I think people are now going, ‘I don’t want my kid growing up that way.’”

Obama responds that he had confidence in Biden’s “heart and your character, and the fact that you are going to be able to reassemble the kind of government that cares about people and brings people together.”

Another scene features Biden discussing the final months before his son Beau died of brain cancer and recalling thinking “to myself, what would happen if his insurance company was able to come in — which they could have done before we passed Obamacare — and said, ‘You have outrun your insurance.’”

Obama says, “I couldn’t be prouder of what we got done.”

“Twenty million people have health insurance that didn’t have it because of what we did,” the former president adds.

Eds: This story has been updated to correct final Obama quote to 20 million people receiving health insurance, not 20 million.