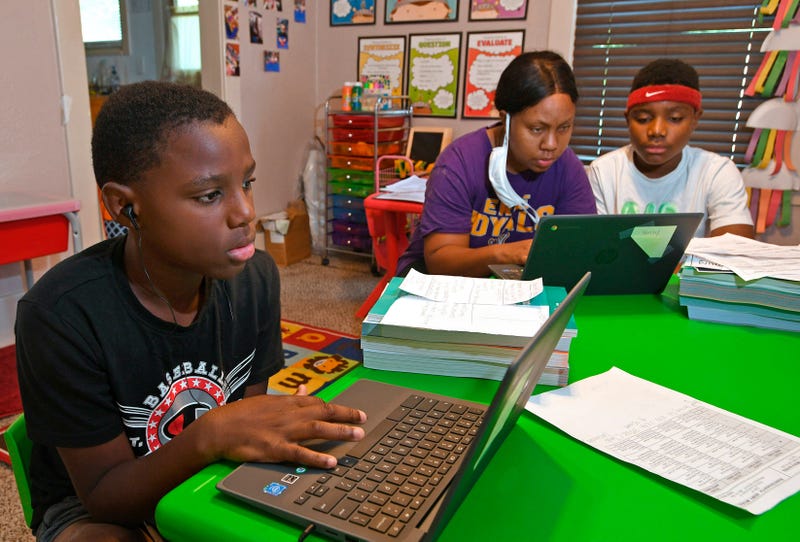 Photo credit From left: Michael Henry, 11; his mother Mary Euell, 30; and his brother Mario Henry, 12, work through math lessons remotely at their west Erie, Pa., home, Tuesday, Sept. 8, 2020, on the first day of classes for the Erie School District. Most of the district's 11,000 students are beginning the school year with remote learning, to slow the spread of COVID-19, the new coronavirus. (Christopher Millette/Erie Times-News via AP)
By The Associated Press

HOUSTON (AP) — Students across the U.S. ran into computer glitches Tuesday as they began the school year with online instruction at home because of the coronavirus, adding to the list of problems that have thrust many a harried parent into the role of teacher’s aide and tech support person.

The online learning platform Blackboard, which provides technology for 70 of the nation’s 100 biggest districts and serves more than 20 million U.S. students from kindergarten through 12th grade, reported that websites were failing to load or were loading slowly, and users were unable to register on the first day of school.

Three of Texas’ largest districts — Houston, Dallas and Fort Worth — were hit with technical problems, as were school systems in places such as Idaho and Kansas. A ransomware attack forced schools in Hartford, Connecticut, to postpone Tuesday's start of virtual and in-person classes.

A Blackboard spokesperson said the problems with the company's website content management system occurred because of a big morning surge in online traffic. D'Anthony White said the system was restored by about 1:15 p.m. and the company was working on refining its approach to prevent further problems. He apologized for the disruption.

“While we planned for a surge in traffic greater than a typical back-to-school period, the patterns of usage exceeded what we anticipated, resulting in some latency and unavailability for some sites,” White wrote in an email to The Associated Press.

Elsewhere across the country, Seattle’s system crashed last week. An online learning program used in Alabama and other places recently went down. And North Carolina’s platform crashed on the first day of classes last month.

Amanda Mills’ 8-year-old son, Rowan, woke up excited to start his first day of third grade, even though it was online through Idaho’s largest school district, based in the town of Meridian, just outside Boise. But they ran into trouble even after practicing logging in smoothly on Monday.

“Whatever happens, we’ll figure it out and we’ll make it work however we can, and rely on the patience of those teachers who are up against their own obstacles," Mills said. “It’s a weird, wild world right now.”

Summer break gave school districts time to iron out kinks that cropped up when the virus forced them to switch to online classes in the spring. But the new school year already has been plagued by some of the same problems, with no end in sight to the outbreak that has infected more than 6.3 million people and killed 189,000 in the U.S.

Erik Rasmussen, a Falls Church, Virginia, resident who has three children taking online classes, said he regularly copes with computer glitches and short attention spans. The divorced dad has his children half the time.

“You put your kids in front of the computer, and then I go to do my work, but kids are kids — they’re going to turn off the video function and start playing a game,” he said.

In the Houston school system, with 209,000 students, a web hosting service went down, causing problems for families as they tried to sign into the district’s main classwork portal. Families were given a different link to access the portal until the problems were resolved by about noon.

The Dallas and Fort Worth districts said they were working to fix problems with their phone lines and websites.

“In this unprecedented school year, we must remain flexible and quickly adapt to changing conditions and circumstances like we noticed this morning,” Houston interim Superintendent Grenita Lathan said.

Blackboard Inc. announced late in the afternoon, about the time the school day was over in the eastern half of the country, that normal service had been restored.

Florida’s largest school district, in Miami-Dade County, had assured parents that it had consolidated different programs into one platform that would be easier to navigate. But software glitches and cyberattacks disrupted the first week of the new school year that started Aug. 31.

A high school student was arrested and accused of orchestrating a series of network outages. School administrators believe other people may be doing the same.

Christy Rodriguez, 36, said her third- and fourth-grade boys’ classes struggled with connection problems during the first week of school.

“Four full days were lost,” she said. “Either somebody is not able to go on, or the screen goes blank, or the teacher can’t hear the kids, so the teacher then just logs off and then sends a message to the parents.”

Rodriguez said she has been forced to work until late at night because her children need help fixing connection problems.

Another parent, Alessandra Martinez, said her 7-year-old son has struggled with logins, passwords and connection problems. He had a meltdown Friday when he was moved to a smaller breakout group but didn’t see the teacher and didn’t know what he was supposed to be doing.

“At their age, everything is amplified, and it feels like a big deal,” Martinez said.

Martinez said she was against the school district using a product commonly employed by parents who home-school.

“This is a home-schooling program, but for parents who are working from home and have multiple children, it is a bit overwhelming,” she said. “We have this set up as a one-size-fits-all, and it doesn’t work for everybody.”

In Hartford, where the start of the school year was pushed back to Wednesday, parents were upset at what they called the last-minute notice of the delay. They noted that officials knew about the problem since the weekend.

Kate Court said her 13-year-old son was already dressed and ready to go to the bus stop when she learned of the postponement. The shipping warehouse employee counted herself lucky that her mother could watch over the teen and his younger brother so she didn't have to miss work.

“This is crazy,” Court said. “We’re looking for normalcy again, whatever that may be.”

This story has been corrected to delete mention of Rasmussen having a child who is in college.