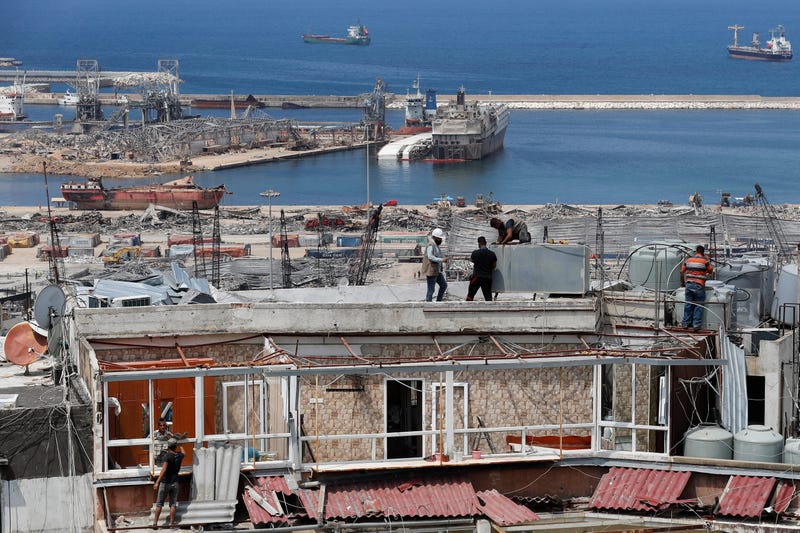 BEIRUT (AP) — A Lebanese diplomat was appointed to form a new government in crisis-hit Lebanon on Monday after winning the backing of major political parties.

President Michel Aoun asked Lebanon’s ambassador to Germany, Mustapha Adib, to form a new government after he secured 90 votes in the 128-member parliament.

Adib told reporters his number one priority will be to quickly form a government able to implement crucial reforms to regain the trust of the Lebanese and international community.

His appointment comes weeks after a devastating explosion in Beirut. The country is also mired in a severe economic crisis.

Lebanon's president is holding consultations with heads of parliamentary blocs to designate a new prime minister for the crisis-stricken country, with a career diplomat poised to win the job Monday.

Lebanon's ambassador to Germany, Mustapha Adib, was expected to be named as prime minister-designate and asked to form a new government after winning the backing of major parties, including the crucial support of senior politicians from his own Sunni Muslim community.

The consultations were being held hours before French President Emmanuel Macron was due to arrive for a two day-visit, during which he is expected to press Lebanese officials to formulate a new political pact to lift the country out of its multiple crises and political stalemate in the wake of the devastating Beirut explosion earlier this month.

It’s Macron’s second visit to the former French protectorate in less than a month. He came days after the devastating Aug. 4 blast in the port of Beirut that killed 190 people, wounded 6,000 and damaged residential and commercial areas in large parts of the capital.

The government resigned less than a week after the blast.

Macron and other world leaders as well as the International Monetary Fund have refused to give assistance to Lebanon before its leaders enact major reforms. The swift consensus around Adib, a little known diplomat, signaled a sense of urgency by Lebanon's traditional politicians to try and contain the rapidly worsening economic and financial crisis and show movement ahead of Macron's visit.

Former Prime Minister Saad Hariri emerged from his meeting with Aoun on Monday, telling reporters his 18-member bloc had given its backing to Adib. He called for the formation of a government of experts “that implement reforms aimed at restoring the world's confidence in our economy so we can start to emerge from this crisis.”

Adib, who returned from Germany to Lebanon on Saturday, was the only name to emerge as a favorite for the post of prime minister, who according to Lebanon’s sectarian-based power sharing system has to be a Sunni Muslim. The candidate who gets the most support is asked to form the new Cabinet, but Lebanon’s divided political class has often been bogged down over who holds senior posts and key ministries.

Adib was named by four former prime ministers, including Hariri, on the eve of Monday's consultations.

Earlier Sunday, the head of the powerful Hezbollah militant group, Hassan Nasrallah, said his supporters will cooperate and facilitate the formation of a government that would be able to improve economic conditions and undertake major reforms.

The Iran-backed militant group, which has a dominant role in Lebanon’s politics, has come under intense criticism and public scrutiny as the country faces multiple devastating crises. Hezbollah and its allies were also expected to name Adib.

An unprecedented economic crisis had already sapped the Lebanese currency of more than 80% of its value, driving unemployment, poverty and inflation through the roof.

Coronavirus infections and deaths have also spiked, causing concerns and pushing authorities to reintroduce some restrictions on economic and social activities that have largely been ignored amid the slump. And the recent explosion badly damaged the port of Beirut, a main trade channel for the small country, which depends on imports.

Prime Minister Hassan Diab’s government, backed by Hezbollah and its allies, resigned on Aug. 10, six days after nearly 3,000 tons of ammonium nitrate exploded in Beirut’s port, where it had been stored for six years.

Adib, who has been Lebanon’s ambassador to Germany since 2013, served as an advisor to one of Lebanon’s former Prime Ministers, Najib Mikati. He took part in the committee in charge of writing Lebanon’s new electoral law in 2005 and 2006, and acted as chief of Cabinet in 2011.

The 48-year-old is a native of the northern city of Tripoli, holds a PhD in law and political sciences and had taught in universities in Lebanon and France.