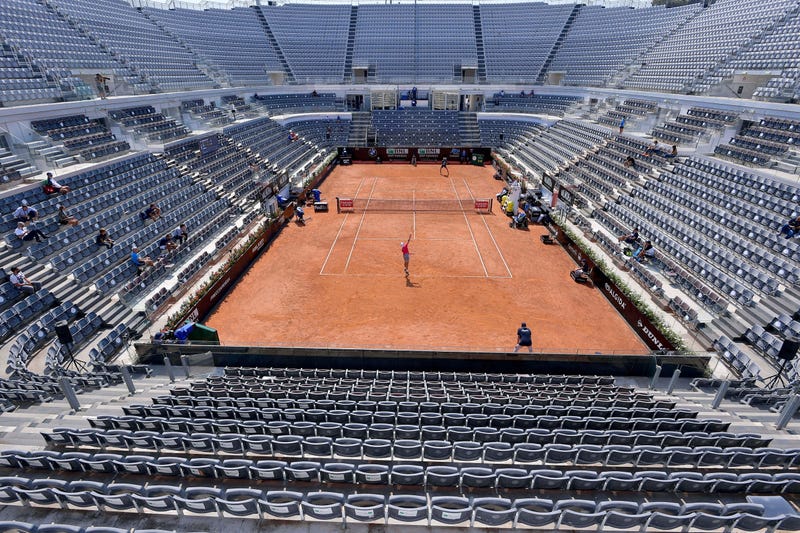 Photo credit The stands around the Central Court of the Foro Italy are empty during a match between Italy's Mattia Berrettini and Argentina's Federico Coria, at the Italian Open tennis tournament in Rome, Wednesday, Sept. 16, 2020. The tournament at the Foro Italico was rescheduled from May because of the pandemic and is being played without fans in attendance. (Alfredo Falcone/LaPresse via AP)
By The Associated Press

ROME (AP) — Novak Djokovic behaved better Wednesday in his first match since being defaulted from the U.S. Open.

The top-ranked Serb was mostly courteous with the chair umpire during a 6-3, 6-2 win over local wild-card entry Salvatore Caruso in his opening match at the Italian Open.

When the umpire came down to inspect a ball mark on the red clay early in the first set and made an overrule in Caruso’s favor, Djokovic just replied, “Yup,” and rubbed out the mark with his red sneaker.

When Caruso impressed him — the Italian hit 13 winners to Djokovic’s 12 — Djokovic said, “Bravo.”

Djokovic’s only testy moment came during the third game of the second set, which went to deuce seven times before Djokovic finally broke Caruso’s serve. As the game wore on, Djokovic appeared bothered by crowd noise, even though the Campo Centrale is empty of fans this year because of the coronavirus pandemic.

The only people inside the stadium were coaches and others working at the tournament.

“Which ones?” the umpire asked Djokovic, trying to figure out who was bothering him.

On Monday, Djokovic said that he had learned “a big lesson” after he was thrown out of the U.S. Open 10 days ago for unintentionally hitting a line judge in the throat with a ball.

Later, nine-time Rome champion Rafael Nadal was to make his return to competition after a seven-month absence against Pablo Carreño Busta.

The clay-court event, which was rescheduled from May because of the pandemic, is an important warmup for the rescheduled French Open, which starts in 11 days.