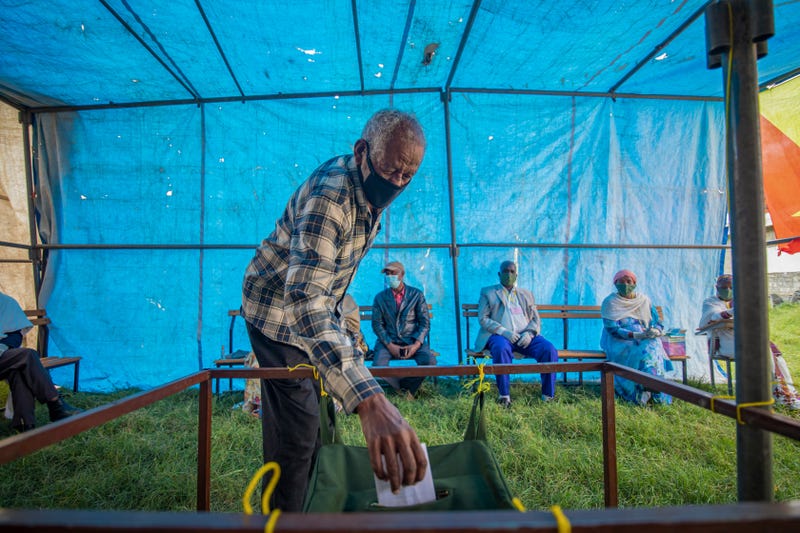 Photo credit Residents cast their votes in a local election in the regional capital Mekelle, in the Tigray region of Ethiopia Wednesday, Sept. 9, 2020. People began voting in Ethiopia's northern Tigray region on Wednesday in a local election defying the federal government and increasing political tensions in Africa's second most populous country. (AP Photo)
By The Associated Press

Tigray officials have warned that an intervention by the federal government would amount to a “declaration of war.” They have objected to the postponement of the national election, once set for August, because of the coronavirus pandemic and the extension of Prime Minister Abiy Ahmed's time in office.

Over the weekend, Ethiopia's upper house of parliament called Wednesday's election unconstitutional. Ethiopia’s leader has ruled out a military intervention, but there are fears any punitive measures by the federal government could further escalate tensions.

The standoff with the northern region is the latest challenge to the administration of Abiy, who won the Nobel Peace Prize last year in part for introducing political reforms. He took office in early 2018. The Tigray region’s ruling party, the Tigray People’s Liberation Front, was the dominant one in Ethiopia's previous government.

“This election is illegal because only the National Election Board can conduct elections in Ethiopia,” Abiy said in an interview with the state broadcaster, EBC, on Tuesday evening. “TPLF’s rule over the region is extended until the upcoming election. If the party doesn’t take part in the general election, it won’t be acceptable.

“These types of small gatherings won’t be a headache for us,” Abiy added.

Some 2.7 million people in the Tigray region were expected to cast their votes at more than 2,600 polling stations, regional election officials said.

A regional broadcaster, Tigray TV, showed voters lining up in the early hours Wednesday. Two residents of the regional capital, Mekelle, told The Associated Press there was tight security in the city and surrounding areas. Bikes and auto rickshaws were banned from the city as of Tuesday evening.

On Monday, Ethiopian security officials removed reporters from a plane heading to the region, confiscating their I.D.s, cameras and other equipment. Separately, a non-governmental organization told the AP they were barred from observing the election “for no sufficient reason.”

The group, Seb Hidri, said the Tigray People’s Liberation Front was behind the ban.