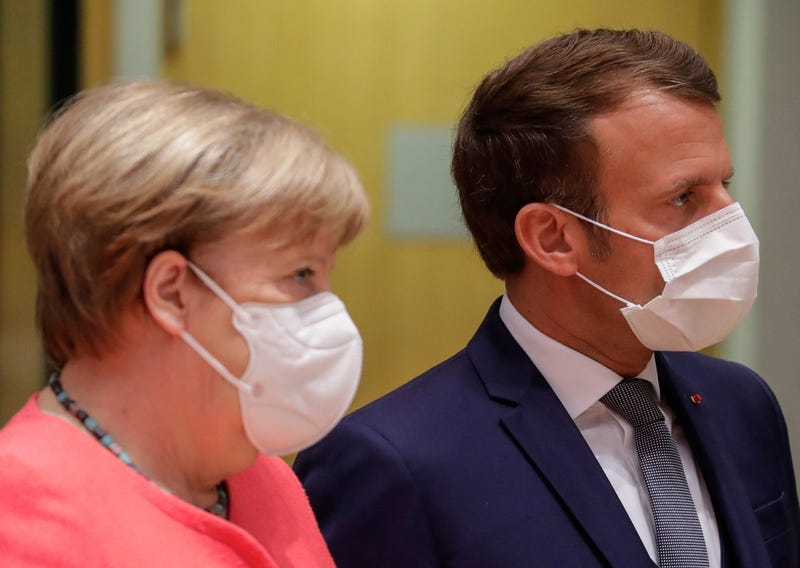 Photo credit German Chancellor Angela Merkel, left, and French President Emmanuel Macron arrive for a round table meeting at an EU summit in Brussels, Friday, July 17, 2020. Leaders from 27 European Union nations meet face-to-face on Friday for the first time since February, despite the dangers of the coronavirus pandemic, to assess an overall budget and recovery package spread over seven years estimated at some 1.75 trillion to 1.85 trillion euros. (Stephanie Lecocq, Pool Photo via AP)

BRUSSELS (AP) — Near the end of Friday's opening summit day, European Union leaders acknowledged they were about as far apart from reaching a deal on an unprecedented 1.85 trillion euro ($2.1 trillion) EU budget and virus recovery fund as the seating distance imposed upon them for health reasons.

“The differences are still very, very big and so I can’t predict whether we will achieve a result this time,” said German Chancellor Angela Merkel. “So I expect very, very difficult negotiations.”

After two full sessions, the leaders briefly broke up ahead of dinner to allow summit host and European Council President Charles Michel to work with individual nations to narrow down their sizable differences over who should give and get the money and under what conditions.,

On a terrace at the top of the summit center overlooking the Belgian capital, Michel had talks with Merkel, French President Emmanuel Macron, Dutch Prime Minister Mark Rutte and his Hungarian counterpart Viktor Orban — many of the opposing forces that could turn the summit into a failure by Saturday night.

Czech Prime Minister Andrej Babis said that on several key issues, “I don't have the agreement that we are getting close to an agreement."

“I am not optimistic, but you never know. Nobody wants another meeting,” said Rutte at the start of the summit.

Macron underscored the importance of the challenge. “The coming hours will be absolutely decisive,” he said. “It is our project Europe that is at stake.”

The challenges facing the 27 EU leaders are formidable. The bloc is suffering the worst recession in its history and member states are fighting over who should pay the most to help other countries and which nations should get the most to turn around their battered economies.

As the summit got underway all leaders were wearing masks. The usual hugs, handshakes and kisses were replaced by friendly nods and elbow bumps. The jovial atmosphere was not expected to last long at what will likely be one of the most brutal and bruising summits of recent times. What is slated as a two-day meeting could go even longer, if necessary, to bridge the differences between leaders.

The urgency is such that the leaders have ended a string of coronavirus-enforced videoconference summits and are meeting in person for the first time since the pandemic began its devastating sweep around the globe.

The usual summit venue, an intimate room high up in the urn-shaped Europa center, was deemed too snug to be safe and instead the leaders have been sent down to meeting room EBS-5, whose 850 square meters (9,150 square feet) normally fits 330 people.

Delegations were cut to a minimum, leaving leaders more dependent on their own knowledge of complicated dossiers. It should put a smile on the face of Merkel, who has been in office for 15 years and seen countless leaders come and go.

Since the pandemic struck, she has been seen as a safe pair of hands to lead her country through the crisis and now that Germany holds the rotating six-month EU presidency her stature will be even greater at the summit. On top of that, she is celebrating her 66th birthday on Friday.

The members were already fighting bitterly over the seven-year, 1-trillion-euro EU budget when COVID-19 was still a local story in Wuhan, China, late last year. Then the virus hit the EU head-on and estimates are now that the economy of the 19 countries that use the euro currency will contract by 8.7% on average this year.

It sent the EU into a panic as it was at a loss on how to coordinate the policies of its member states early on. Now, the EU’s executive is proposing a 750-billion-euro recovery fund, partly based on common borrowing, to be sent as loans and grants to the most needy countries.

Merkel, who is in her last term and has her political legacy at stake, already got Germany to agree to join in a common debt program to alleviate the economic suffering in mostly southern and eastern member states.

And she has agreed to include grants and not just loans in the recovery package to avoid overburdening member states that already have high debt.

Rutte doesn't like that and Dutch officials said they would stick to their tough line, raising the specter of a further summit being needed.

There are also plans to link budget funds to respect for basic democratic rights that the European Parliament says are under threat in nations like Hungary and Poland. Some eastern European nations will be objecting to having that as part of the deal.

Hungarian Prime Minister Viktor Orban was clear Friday he would fight any such strings attached to the plan. “Our odds are continually improving," he said.

music
Da Brat reveals her grandmothers loved Allen Iverson, but there was one problem
music
BTS are returning to the United Nations: Here's why
sports
Bucs player vents after Brett Favre spotted in stands
1thing
Do you need to rake leaves in the fall? Conservation group says ‘no’
news
Vanessa Bryant sues LA Sheriff's Dept. over photos allegedly taken by deputies at crash scene
music
Jack Osbourne's 3-year-old daughter has coronavirus: 'Children can get COVID'