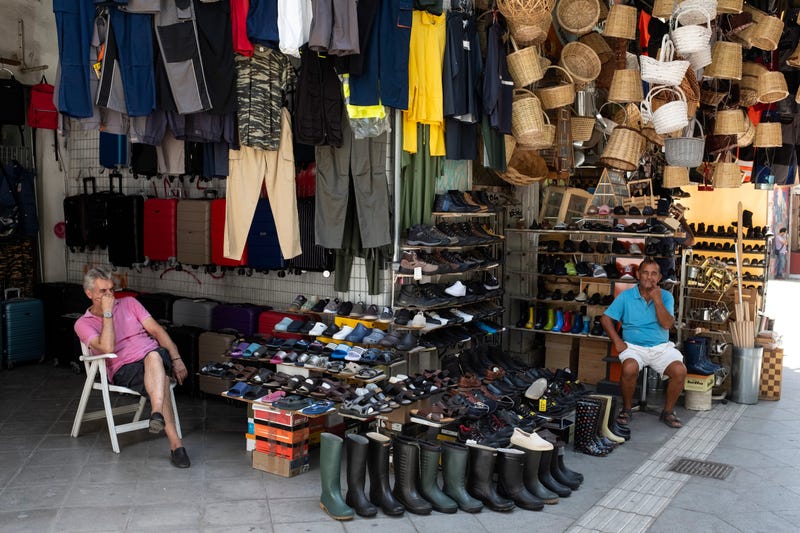 Photo credit Two vendors sit outside shops at a market street, in Athens, Thursday, Sep. 3, 2020. Greece has suffered a huge drop in output in the second quarter of the year, plummeting 15.2% on an annual basis, but the government insisted the figures did not worsen the country's annual outlook. (AP Photo/Yorgos Karahalis)
By The Associated Press

ATHENS, Greece (AP) — Tourism-dependent Greece suffered a huge drop in economic output in the second quarter of the year, plummeting 15.2% on an annual basis, but the government insisted Thursday that the figures did not worsen the country’s annual outlook.

The Greek Statistical Authorities reported the drop in gross domestic product on Thursday, adding that the loss from the previous quarter was 14%, based on available seasonally adjusted data.

The Greek economy is expected to shrink 9% this year due to the effects of the coronavirus pandemic and the lockdown measures that have severely affected international travel, according to the current European Commission forecast.

Greece says it expects the contraction to be slightly milder. Government spokesman Stelios Petsas on Thursday said the latest figures reflected the effects of the lockdown and had not changed Greece’s annual expectations, which are of a 7.9% decline in GDP this year.

The pandemic, however, is likely to hamper Greece’s efforts to overcome many long-term problems, including high levels of public debt, a large volume of distressed private sector loans and high unemployment. Those problems were caused by a major financial crisis that forced Greece to seek international bailouts and spend most of the previous decade in recession. The European Union's economy as a whole is set to contract 8.3% with Italy, Spain and Croatia expected to suffer the worst financial consequences with a 2020 downturn of around 11%, according to the commission.