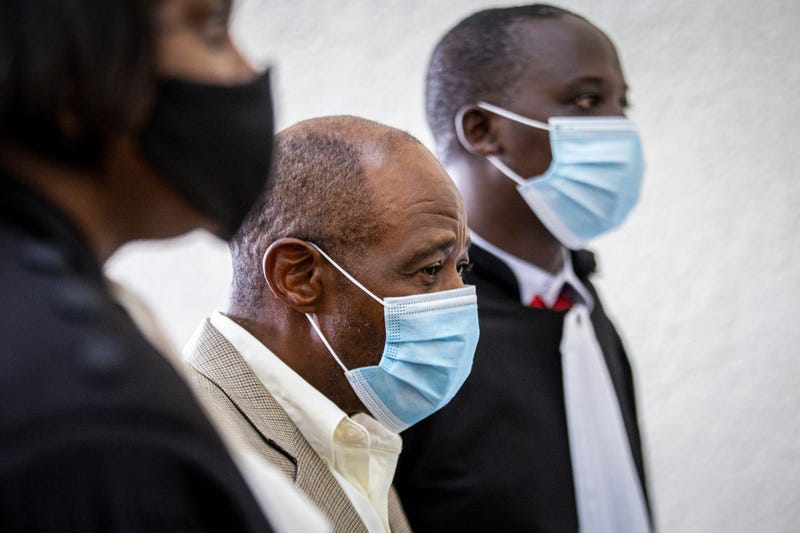 Photo credit Paul Rusesabagina, center, who inspired the film "Hotel Rwanda" for saving people from genocide, appears at the Kicukiro Primary Court in the capital Kigali, Rwanda Monday, Sept. 14, 2020. Rusesabagina became famous for protecting more than 1,000 people as a hotel manager during Rwanda's 1994 genocide and was awarded the U.S. Presidential Medal of Freedom in 2005 but Rwandan authorities accused him of supporting the armed wing of his opposition political platform, which has claimed responsibility for deadly attacks inside Rwanda. (AP Photo)
By The Associated Press

Rusesabagina pleaded not guilty to all 12 charges and said he denied the accusations when he was questioned by Rwandan investigators.

Rusesabagina, 66, asked to be released on bail, citing poor health that has caused him to be taken to hospital three times in the week that he has been held in Rwanda.

“I request that I am given bail and I assure the court that I will not flee from justice,” Rusesabagina said. The court said it will rule on his bail application on Thursday.

Rusesabagina, credited with saving more than 1,000 lives during the 1994 genocide, appeared in handcuffs in Kagarama Court in the capital for a pre-trial hearing, in which the prosecution requested court permission to continue detaining him until investigations are completed.

Rusesabagina was represented by Rwandan lawyers David Rugaza and Emeline Nyembo, who have been discounted as state-imposed representation by his family outside Rwanda.

Neither his lawyers nor the prosecution explained the circumstances under which Rusesabagina arrived in Kigali last week from Dubai. He had traveled from the U.S. to Dubai and then mysteriously appeared in Rwanda. The Rwandan court said the suspect was arrested at Kigali International Airport, contradicting the earlier police version that he was arrested through “international cooperation.”

When Rwandan President Paul Kagame spoke on national broadcasting about the case, he indicated that Rusesabagina may have been tricked into boarding a private plane in Dubai that took him to Rwanda.

Amnesty International called on the Rwandan authorities to guarantee Rusesabagina his right to a fair trial.

“The lack of transparency around the arrest of Paul Rusesabagina and reports that he has been denied access to the lawyer hired by his family are red flags that cannot be ignored as the authorities prepare for his trial,” said Deprose Muchena, Amnesty International’s Director for East and Southern Africa.

Rusesabagina’s daughter Carine Kanimba told The Associated Press that the family was not even aware he was to appear to court Monday as the state-appointed lawyers didn’t inform them. She said they learned of the court hearing through the media.

“This is a travesty of justice," Kanimba said of the hearing. Speaking on the phone from Belgium, she said her father was the victim of an abduction, disappearance, and extraordinary rendition from Dubai, in the United Arab Emirates to Kigali, Rwanda.

Rusesabagina has been a vocal critic of the Kagame government and has not lived in Rwanda since 1996. He holds Belgian citizenship and is a resident of the U.S.