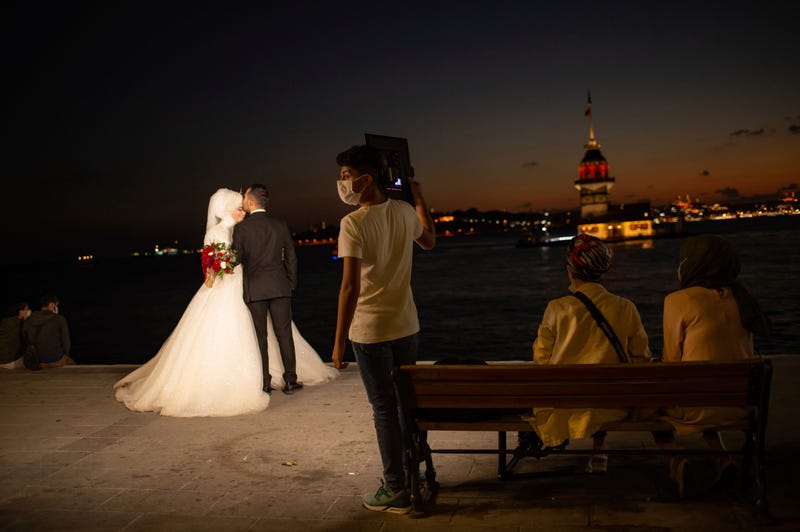 Photo credit A wedding photographer's assistant, wearing a mask for protection against the spread of coronavirus, holds lighting equipment, as a couple poses for photographs backdropped by Istanbul's iconic Maiden's Tower (Kiz Kulesi) at the Bosphorus Strait separating the European and Asian sides of Istanbul, Friday, Sept. 11, 2020. Turkey is getting tough on people who flout self-isolation rules despite testing positive for the coronavirus. An Interior Ministry circular sent to the country's 81 provinces on Friday said people caught leaving their homes despite isolation orders will be quarantined and supervised at state-owned dormitories or hostels. (AP Photo/Yasin Akgul)
By The Associated Press

ISTANBUL (AP) — The governor of Istanbul has banned boating companies from hosting weddings and similar gatherings as part of new measures to combat the spread of COVID-19 in Turkey's most populous city.

The governor’s office also reintroduced a ban on concerts and festivals in open spaces. It said the restrictions were needed because people were not adequately heeding precautions like physical distancing and confirmed that virus cases have increased.

The bans were to go into effect on Saturday but were postponed until Monday.

Coronavirus infections and deaths began increasing in Turkey after the government loosened restrictions on public activity in June, returning to levels last seen in mid-May.

On Saturday, the Health Ministry announced 48 more deaths and 1,509 new cases, bringing the country's total death toll in the pandemic to 6,999 and cases to nearly 290,000.

Officials have cited engagement parties and weddings as a key source for new infections, many from the party boats that cruise Istanbul’s scenic Bosporus strait, which bisects the city of about 16 million.

On Saturday, Turkish soccer team Besiktas announced that technical director Sergen Yalcin had tested positive for the coronavirus. Besiktas is one of the top soccer teams in Turkey.