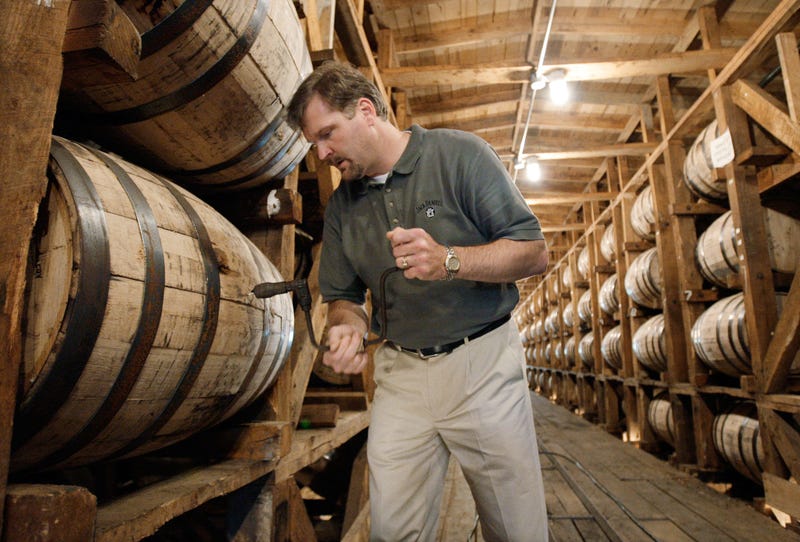 Photo credit FILE – In this May 20, 2009, file photo, Jeff Arnett, the master distiller at the Jack Daniel Distillery in Lynchburg, Tenn., drills a hole in a barrel of whiskey in one of the aging houses at the distillery. After 12 years of leading production of the powerhouse Jack Daniel's whiskey brand, Arnett is stepping down as master distiller at the Tennessee distillery, the company announced Thursday, Sept. 3, 2020. (AP Photo/Mark Humphrey, File)
By The Associated Press

As master distiller, Arnett was responsible for overall whiskey-making operations at the famed distillery in Lynchburg, Tennessee. Through the years, master distillers took on another role as leading brand ambassadors to promote their products. Jack Daniel’s — the flagship brand of Louisville, Kentucky-based Brown-Forman Corp. — is sold in more than 170 countries.

The company didn't give a reason for Arnett's departure. His career at the distillery spanned nearly 20 years and earlier roles included overseeing quality control and the brand's single barrel program.

Arnett said in a statement that his work at the distillery was “an incredible chapter in my life and I look forward to spending some time to think about what the next chapter will hold.”

He said it was an “honor and privilege" to be one of only a handful of people to have served as master distiller of a brand “known around the world as simply ‘Jack.’”

The distillery said it would have an announcement on Arnett’s replacement in coming weeks.

Larry Combs, the distillery's senior vice president and general manager, thanked Arnett for his leadership in carrying on the brand's long tradition.

“He has worked tirelessly on behalf of the distillery and brought with him the creativity and the expertise that makes Jack Daniel’s the most valuable whiskey brand in the world," Combs said.

This week, Brown-Forman reported that underlying net sales grew 3% for the entire Jack Daniel’s lineup during the spirits company's first quarter compared to the year-ago period.

The company's other leading brands include Woodford Reserve and Old Forester bourbon and el Jimador and Herradura tequila.