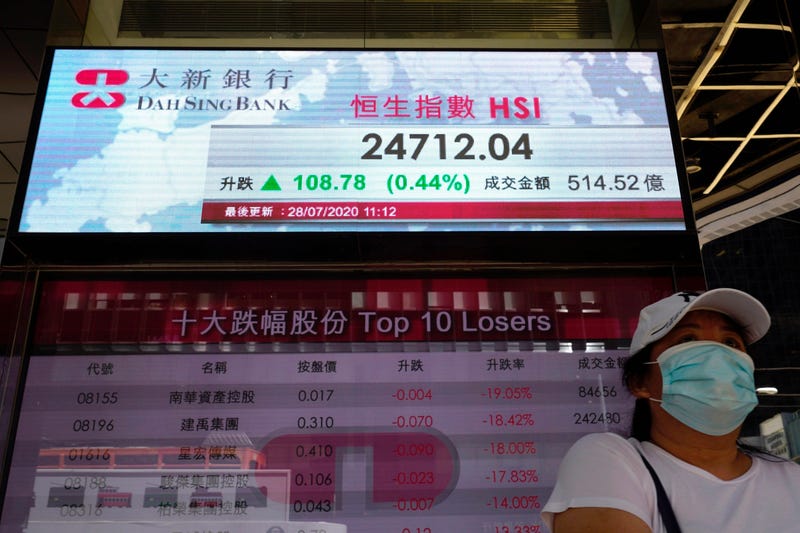 Photo credit A woman wearing a face mask stands beneath a bank's electronic board showing the Hong Kong share index at Hong Kong Stock Exchange in Hong Kong Tuesday, July 28, 2020. Shares advanced in Asia on Tuesday after U.S. stocks resumed their upward march on Wall Street, while the price of gold pushed to nearly $1,970 per ounce. (AP Photo/Vincent Yu)

The S&P 500 fell 20.97 points, or 0.6%, to 3,218.44 after a last-hour slide erased a small gain from earlier in the day. Caution across markets also helped send Treasury yields a bit lower and gold a bit further into record heights.

This week marks the heart of earnings reporting season for the S&P 500, and several big companies gave results that fell short of analysts’ already lowered expectations as the pandemic stole customers away and increased some costs.

3M was a particularly heavy weight on the Dow after dropping 4.8%. The maker of N95 masks and various other products for consumers and businesses reported a profit for the latest quarter that fell shy of analysts’ expectations. It said sales trends have been improving this month, but it also said there’s still too much uncertainty to offer forecasts for future performance.

McDonald’s lost 2.5% after its earnings during the spring plunged by more than two-thirds from a year earlier as the pandemic kept customers away. The results were weaker than Wall Street was expecting.

Ecolab slumped 8.6% for one of the largest losses in the S&P 500 after it said its profit fell more steeply last quarter than analysts expected. The company sells sanitizing and other products to food service companies and other customers, and it was hurt by shutdowns in travel and dining due to the pandemic. It also said, though, that it expects the latest quarter to mark the low point for the company.

Losses for big technology stocks also helped to drag the market lower. The CEOs of Amazon, Apple, Facebook and Google’s parent company are all set to give testimony Wednesday to a House of Representatives committee investigating Big Tech’s market dominance.

On the winning side was Pfizer, which climbed 3.9%. It reported a profit for the latest quarter that topped analysts’ expectations, even though it was down by nearly a third from a year earlier. It also nudged up its profit forecast for the full year after announcing the start of a late-stage trial of an experimental COVID-19 vaccine that it’s developing with German partner BioNTech.

“Most investors are looking through 2021 calendar year earnings, as opposed to paying too much attention to the rest of this year,” Eric Freedman, chief investment officer at U.S. Bank Wealth Management

The Federal Reserve also began a two-day meeting on interest rates, with an announcement scheduled for Wednesday. Investors largely expect the central bank to keep short-term rates at their record low, but they’re also looking to hear what it says about how long they may stay there.

The Fed helped launch the stock market’s recovery in late March after slashing interest rates and promising to buy Treasurys, corporate bonds and other debt to prop up the economy. On Tuesday, the Fed said it will extend the lives of seven of the lending programs by three months through the end of the year, an acknowledgment of the severity of the recession.

The S&P 500 is back to within 5% of its record set in February, after earlier being down nearly 34%.

Massive aid from Congress also helped that turnaround to erupt, but a big part of it is about to expire on Friday: $600 in weekly unemployment benefits. Such support has taken on more importance as a report last week showed an unexpected tick higher in the number of workers filing for jobless benefits. Rising coronavirus counts across the Sun Belt have pushed many businesses to close down again.

Many investors are hopeful that Democrats and Republicans can reach a deal on more aid for the 16 million or so Americans who are getting unemployment benefits, even though the two sides still seem to be far apart.

“They’re going to get to a resolution eventually, it’s just how the sausage is made is going to take a little longer and that’s causing a little trepidation,” said Ryan Detrick, chief investment strategist for LPL Financial.

Investors are also more interested in how quickly the money can get to unemployed Americans, rather than how much there will be, said Freedman of U.S. Bank Wealth Management.

Gold, which has rocketed this year on worries about the economy, rose $13.60 to settle at $1,944.60 per ounce. It earlier touched $1,974.40 to set an intraday record for the most actively traded contract for the second straight day.