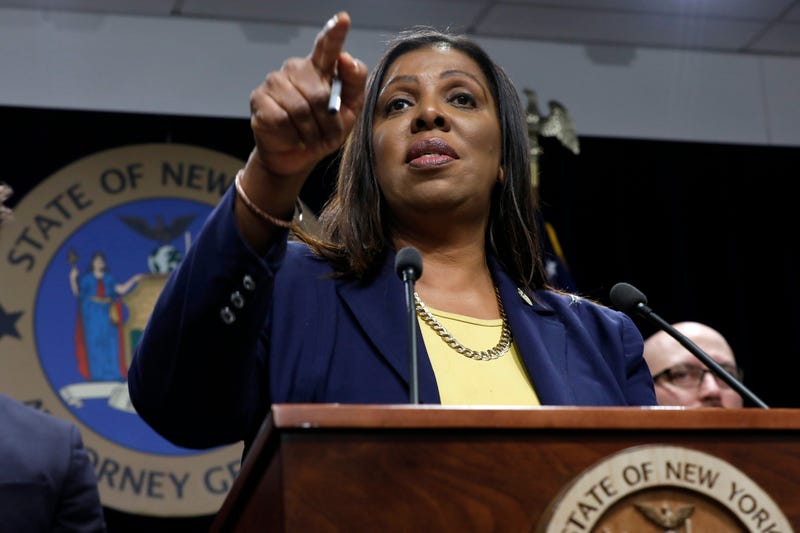 Photo credit FILE- In this Nov. 19, 2019 file photo, New York State Attorney General Letitia James speaks during a news conference at her office in New York. James asked a court Monday, Aug. 24, 2020 to enforce subpoenas into an investigation into whether President Donald Trump and his businesses inflated assets on financial statements. James filed a petition in state trial court in New York City naming the Trump Organization, an umbrella group for the Republican president’s holdings, as a respondent along with other business entities. (AP Photo/Richard Drew, File)
By The Associated Press

NEW YORK (AP) — New York’s attorney general asked a court Monday to compel some of President Donald Trump's business associates, including his son, Eric, to testify and turn over documents as part of her investigation into whether the president's company lied about the value of its assets in order to get loans or tax benefits.

Attorney General Letitia James, a Democrat, said her civil investigation of potential fraud in Trump’s business dealings, which began last year, has been held up by a lack of cooperation from the president and his family.

The petition seeking the court’s intervention was filed after lawyers for Eric Trump abruptly cancelled his planned interview with investigators late last month.

“For months, the Trump Organization has made baseless claims in an effort to shield evidence from a lawful investigation into its financial dealings,” James said in a statement. “They have stalled, withheld documents, and instructed witnesses, including Eric Trump, to refuse to answer questions under oath. That’s why we’ve filed a motion to compel the Trump Organization to comply with our office’s lawful subpoenas for documents and testimony. These questions will be answered and the truth will be uncovered, because no one is above the law.”

The court petition was made just as the Republican Party was nominating Trump for re-election, and the president’s company immediately dismissed it as a political stunt.

“While we have tried to cooperate in good faith with the investigation at every turn, the NYAG’s continued harassment of the company as we approach the election (and filing of this motion on the first day of the Republican National Convention) once again confirms that this investigation is all about politics,” the Trump Organization said in an emailed statement.

James' investigation was launched in March 2019 after Trump’s longtime personal lawyer, Michael Cohen, told Congress that Trump had repeatedly inflated the value of his assets to obtain more favorable terms for loans and insurance coverage.

Among other things, it said investigators were looking into how the Trump Organization and its agents assessed the value of Seven Springs, a 212-acre (0.9-square-kilometer) estate north of New York City.

Trump had initially purchased the property in 1995 with the intent of turning it into a golf club, but after that project failed to progress, he granted an easement over 158 acres to a conservation land trust in 2016 in order to qualify for an income tax deduction.

In its court filing, the attorney general's office said a professional appraisal done at the time determined that Seven Springs was worth $56.5 million prior to the donation. The land being conserved in exchange for the tax deduction was worth $21.1 million, it said.

Cohen said during his congressional testimony that when Trump was trying to buy the Buffalo Bills in 2014, he provided financial statements to Deutsche Bank saying Seven Springs was worth $291 million in 2012.

James' investigators said in the court filing that they have not yet determined whether any law was broken.

The White House referred questions to the Trump Organization.

The president last year accused New York’s governor and attorney general of “harassing all of my New York businesses in search of anything at all they can find to make me look as bad as possible.”

James' office issued subpoenas to the Trump Organization and to Seven Springs LLC in December 2019, seeking financial documents, the filing said. Since then, both have “engaged in extensive good-faith discussions concerning the Trump Organization’s compliance with the subpoenas.” But the two sides are now at an impasse, according to the court filings, which were partially sealed.

The attorney general’s office is also attempting to collect information about the Trump National Golf Club near Los Angeles, where the Trump Organization donated a conservation easement over part of the property in 2014 and received a tax deduction.

And investigators said they were also probing the circumstances of how the Trump Organization handled tax issues related to more than $100 million of debt related to the Trump International Hotel and Tower Chicago that was forgiven between 2010 and 2012. Investigators said they have not been able to confirm whether any of that forgiven debt was recognized as taxable income, according to the court filings.

The list of Trump-related properties being looked at also includes a landmark office building at 40 Wall Street in Manhattan, where the Trump Organization owns a lease.

James' office asked the court to enforce subpoenas sent to the Trump Organization and to a firm that has represented Trump on tax issues. In addition to Eric Trump, it has asked the court to order two lawyers that did work for Trump to sit for interviews with investigators.