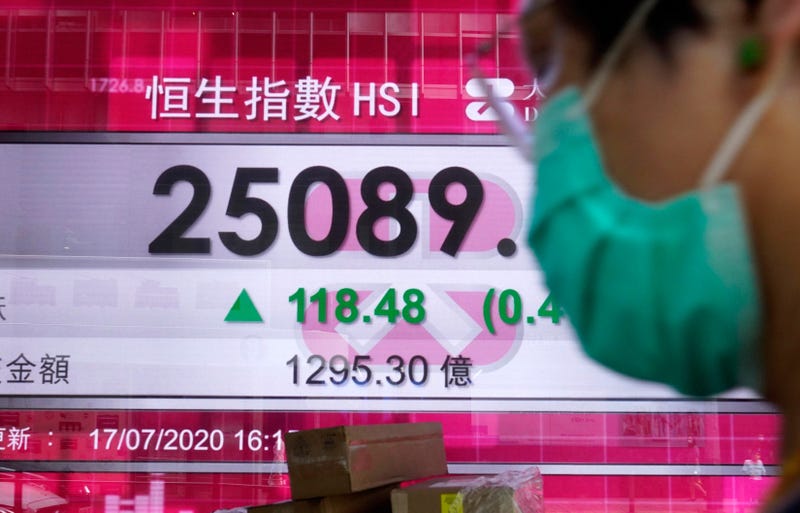 Big technology companies powered stocks higher on Wall Street Monday, extending the market’s gains after a three-week winning streak. The S&P 500 rose 0.8% after being down 0.3% in the early going. Gains by technology and communication stocks and companies that rely on consumer spending outweighed losses elsewhere in the market. Amazon jumped almost 8%. Noble Energy climbed after the company agreed to be acquired by Chevron for $5 billion. Investors are looking ahead to a busy week of earnings reports from major U.S. companies including Coca-Cola and Microsoft. European markets were broadly higher and Asian markets ended mixed.

The S&P 500 was up 0.9% after being down 0.3% in the early going. Gains by technology and communication stocks and companies that rely on consumer spending outweighed losses among industrial stocks, household goods makers and elsewhere in the market.

Citrix Systems and Amazon led the way in the S&P 500, each climbing more than 7%. Microsoft also helped lift the market, rising 4.1%. Noble Energy climbed 5.7% after the company agreed to be acquired by Chevron for $5 billion.

Technology and communications stocks and big e-commerce retailers like Amazon have benefited this year as the pandemic has forced people to largely stay home and rely increasingly on the internet for shopping, work and entertainment. Among the losers have been banks, airlines and cruise lines.

“Last week, you had the value trade come back for a few days,” said Tom Martin, senior portfolio manager with Globalt Investments. “The pattern seems to be that most days lately have been favoring growth over value.”

Wall Street is coming off its third straight weekly gain following improvements in hiring, retail sales and other parts of the economy, along with rising hopes for a COVID-19 vaccine. Underlying it all is massive aid for the economy and the promise of nearly zero interest rates from the Federal Reserve. The overall S&P 500 index has rallied back to within 4.5% of its record set in February and is back to where it was in early June.

Still, worries remain that the rise of coronavirus counts across much of the country will derail efforts to reopen businesses shut down due to the pandemic.

“Until we have more clarity around all these different issues, it wouldn’t surprise us if the market ended the year right where we are today,” said Sameer Samana, senior global market strategist at Wells Fargo Investment Institute.

Investors have an eye on Washington as Congress returns this week to begin work with the White House on another trillion-dollar economic relief package against the backdrop a renewed surge in the outbreak. The U.S. has now registered more coronavirus infections and a higher death count of 140,500 than any other country.

The Fed’s efforts to support markets and expectations that Washington will deliver more financial aid to help Americans weather the economic downturn has been key in keeping markets mostly pushing higher since stocks plunged in March.

“If markets are allowed to trade in a vacuum without policy, you could see much more volatility,” Samana said.

Traders were also looking ahead to a busy week of earnings reports from major U.S. companies, including IBM, Coca-Cola and Microsoft.

Expectations are low for companies’ performance in the April-June quarter due to the pandemic, given the economic fallout from the broad business shutdowns and the rapid increase in unemployment as millions of Americans were laid off or furloughed. But investors want to hear what company CEOs have to say about how they expect their businesses to fare in the second half of this year and in 2021.

“The question is what are the early indications of the third quarter shaping up like?" Martin said.