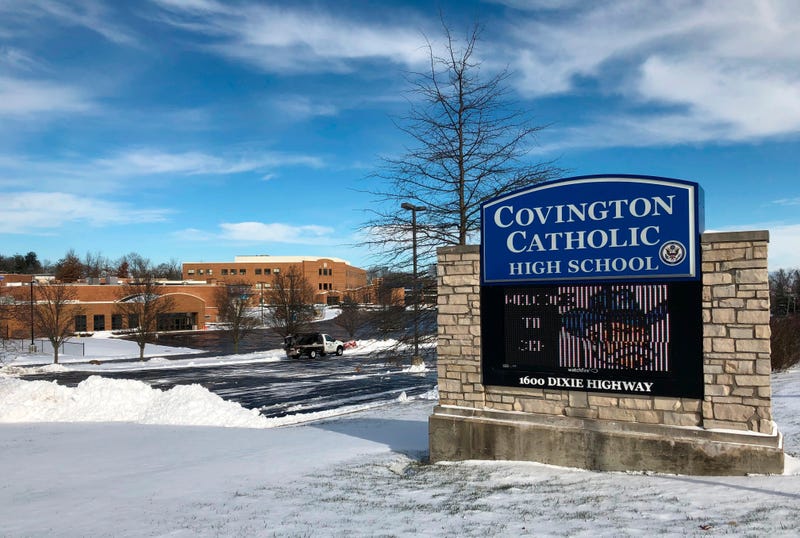 Photo credit FILE - In this Jan. 20, 2019, file photo snow covers the grounds of Covington Catholic High School in Park Hills, Ky. Nicholas Sandmann will urge voters to reelect President Donald Trump during the Republican National Convention's second night on Tuesday, Aug. 25, 2020. Sandmann was among the students from Covington Catholic High School, holding a January 2019 anti-abortion march in Washington. Footage went viral of him during a confrontation with Nathan Phillips, who was participating in a separate demonstration supporting native American rights. (AP Photo/Lisa Cornwell, File)
By The Associated Press

WASHINGTON (AP) — A Kentucky teenager known for video of his interaction with a Native American man during dueling demonstrations at the Lincoln Memorial last year is among Tuesday's speakers at the virtual Republican National Convention.

Nicholas Sandmann will urge voters to reelect President Donald Trump in his speech during the gathering's second night, when the theme is “Land of Opportunity.” Sandmann, who now identifies himself on Twitter as a spokesman for the Transylvania University College Republicans, tweeted that he couldn't express "enough about how excited I am to be apart of this years RNC!”

Sandmann was among the students from Covington Catholic High School in Park Hills, Kentucky, holding an anti-abortion march in Washington in January 2019. Footage of his confrontation with Nathan Phillips, who was participating in a separate demonstration supporting Native American rights, spread widely online.

Both Sandmann, who was wearing a red “Make America Great Again” cap, and Phillips later said they were trying to defuse tensions among three separate groups participating in both demonstrations. Video of the encounter showed Sandmann and Phillips standing very close to each other, with Sandmann staring, and at times smiling, at Phillips as Phillips sang and played a drum.

Sandmann later settled lawsuits against CNN and other media outlets. He will be featured along with first lady Melania Trump and Secretary of State Mike Pompeo as the convention focuses on many hot-button issues, including abortion and Middle East policy, and portrays Democratic presidential nominee Joe Biden as too extreme to win November's election.

“We need to keep talking about Joe Biden’s radical policies," Trump reelection campaign manager Bill Stepien said during an online interview with Politico on Tuesday. "The more we talk about the Democrat policies being pushed by Joe Biden and the radical fringe of his party, the better we are. The more our standing improves in this race.”

But the appearance of Sandmann and guests like Mark and Patricia McCloskey — the white couple facing felony charges for waving guns during a recent Black Lives Matter protest in St. Louis — also counter the everyday Americans who spoke via the internet during last week's Democratic National Convention.

Those praising Biden included New York security guard Jacquelyn Brittany, whose interaction with the former vice president in an elevator went viral, and Kristin Urquiza, whose Trump-supporting father died of coronavirus. Brayden Harrington, 13, talked about working to overcome his stutter with support from Biden, who had a severe stutter himself as a child.