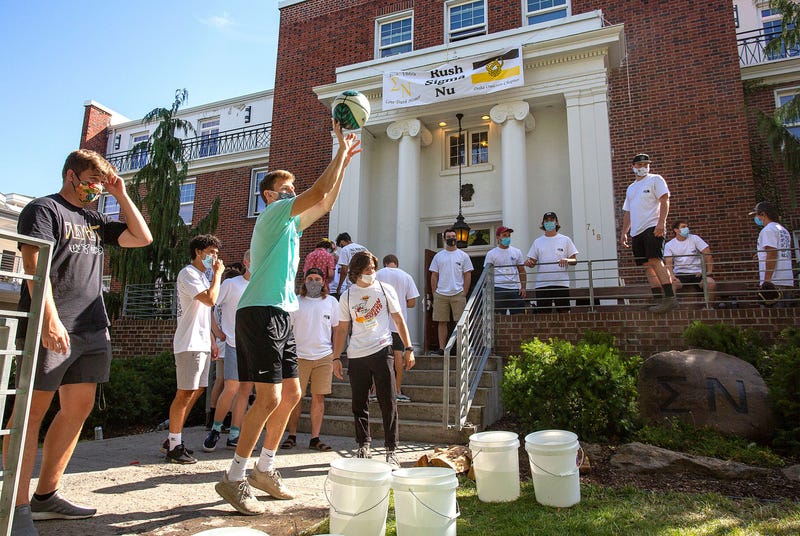 Photo credit University of Idaho students wear face masks while playing a game outside of Sigma Nu fraternity during fraternity bid day, the final day of the recruitment process, on Monday, Aug. 17, 2020, in Moscow, Idaho. Sororities and fraternities at the university are taking a variety of precautions to help prevent the spread of the coronavirus. The first day of classes at the University are on Aug. 24. (Geoiff Crimmins/Moscow-Pullman Daily News via AP)
By The Associated Press

The Missouri Department of Health and Senior Services’ coronavirus dashboard cited 1,974 new confirmed cases of COVID-19 on Saturday, bringing the total since the pandemic began to 101,134. The true number is likely much higher since many people with the virus go undiagnosed.

The number of cases in the state is growing at a rate faster than most places. Data from the U.S. Centers for Disease Control and Prevention shows that over the seven-day period of Sept. 4-10, Missouri saw the nation's sixth-highest number of new cases.

— Oxford University says trials of a coronavirus vaccine its developing with pharmaceutical company AstraZeneca will resume, days after a pause due to a reported side-effect in a U.K. patient.

— India’s confirmed coronavirus tally has crossed 4.6 million after a record surge of 97,570 new cases in 24 hours. India reported another 1,201 deaths Saturday, bringing total deaths to 77,472, the third highest in the world.

COVID-19-related hospitalizations reported by the department continued to drop, a trend that began in July after the state became a national hot spot in June.

EAST LANSING, Mich. — Health officials are strongly recommending Michigan State University students living on or near the school’s East Lansing campus self-quarantine because of an outbreak of the coronavirus.

The Ingham County Health Department says at least a third of the 342 people affiliated with the university testing positive for the virus since Aug. 24 attended parties or social gatherings. At least one third of the gatherings were associated with fraternities or sororities.

The health department says in the three weeks before the surge, only 23 people affiliated with the university had tested positive.

Virginia Tech reported Friday it had 219 positive tests among students and staff for the coronavirus in the previous seven days, putting its total infections at 633 since testing began Aug. 3. The numbers have risen steadily since students returned Aug. 24.

ANCHORAGE, Alaska — Anchorage will receive federal support to aid in lessening the coronavirus outbreak in its homeless population.

There have been 168 confirmed cases of the coronavirus in Anchorage’s homeless shelters and one death. Anchorage Health Department Epidemiologist Janet Johnston says about 100 of those cases are associated with an outbreak at the Brother Francis Shelter.

The city was assigned three employees from the Centers for Disease Control and Prevention and one from the Department of Housing and Urban Development.

The four federal staffers will help with on-site epidemiology, contact tracing and other management of the city’s outbreak.

HONOLULU — The federal Department of Veterans Affairs has sent a team of health care staffers to help contain a coronavirus outbreak at a veterans’ home in Hawaii.

The Honolulu Star-Advertiser reports most of the veteran home’s 74 residents have tested positive for the coronavirus after an asymptomatic staffer is thought to have brought it on site.

Sen. Brian Schatz implored the VA this week to help after asserting the home was understaffed and not equipped to halt the outbreak.

The team will investigate infection control issues at the home and recommend procedures to manage the outbreak.

SIOUX FALLS, S.D. — Coronavirus infections in the Dakotas are the fastest growing in the nation.

North Dakota and South Dakota have led the country in new cases per capita over the last two weeks, with 470.2 new cases per 100,000 people and 408.1 new cases, respectively. That’s according to a tally by Johns Hopkins University.

South Dakota is among the nation’s highest in positivity rates for coronavirus tests in the last week at 17%, according to the COVID Tracking Project. North Dakota’s stands at 5.8%.

Infections were likely spurred by schools and universities reopening and mass gatherings like the Sturgis Motorcycle Rally in South Dakota, which drew hundreds of thousands of people from across the country.

The city council in Brookings, South Dakota, moved its meeting to a local arena to accommodate intense interest, with many citizens speaking against it. The mask requirement ultimately passed, one of the few in the state.

VATICAN CITY — The Vatican says its “necessary and urgent” to return to in-person Masses as soon as anti-coronavirus measures permit.

The head of the Vatican’s liturgy office, Cardinal Robert Sarah, says in a letter to bishops’ conferences Saturday that virtual liturgies, while useful, were no replacement for the real thing. He says physical presence by the faithful in churches was “vital, indispensable, irreplaceable.”

While some Catholic priests claimed coronavirus lockdowns that shuttered churches infringed on their religious liberty, Pope Francis adhered to Italy’s strict lockdown. He halted all public Masses at the Vatican and livestreamed his morning liturgies, and at one point even admonished priests who balked at the measures for their “adolescent resistance.”

Francis had urged the Catholic faithful to obey government coronavirus measures, saying they were responsible for public health. This week, he was seen wearing a face mask for the first time and has been using hand sanitizer.

In recent weeks, Francis has resumed public gatherings and celebrated a handful of public Masses before limited, socially distanced groups.

The Department for Health and Social Care show a daily increase of 3,497 new cases, slightly down from Friday’s figure of 3,539, which was the highest since May 17.

The daily cases reported are more than double those a week or two back, a change that has stoked concerns of a second wave of the virus in the country. The U.K. has recorded more than 41,600 virus-related deaths, Europe’s highest.

The British government says social gatherings in England will be limited to six people indoors and outdoors and rule-breakers will face fines starting Monday.

ROME — Italy added another 1,501 coronavirus cases to its official count.

The Health Ministry says another six people died in the past day, bringing Italy’s official death toll to 35,603.

Infections have been steadily increasing for the past six weeks, mostly among Italians returning from vacation. While many infected are asymptomatic, the number of people in the ICU went from 121 to 182 in the past week.

LONDON — Oxford University says trials of a coronavirus vaccine its developing with pharmaceutical company AstraZeneca will resume, days after pausing due to a reported side effect in a patient in Britain.

The university says in large trials “it is expected that some participants will become unwell and every case must be carefully evaluated to ensure careful assessment of safety.”

It says globally some 18,000 individuals have received study vaccines as part of the trial. It wouldn’t disclose the medical information about the illness for reasons of participant confidentiality but says it is “committed to the safety of our participants and the highest standards of conduct in our studies and will continue to monitor safety closely.”

That brought the total confirmed cases to 653,356 and nearly 14,000 confirmed deaths, state health official say. However, the true number of cases in Texas is likely higher because many people haven’t been tested and studies suggest people can be infected and not feel sick.

Health officials estimated 71,292 cases are now active, with 3,475 requiring hospitalization. The number of hospitalizations has been decreasing since peaking in July at 10,893.

“Until this goes away, the single best thing all of us can do — and it’s not complicated — is to wear a mask, practice social distancing,” McConnell said. “Until we get a vaccine, that’s the only way we can continue to work.”

The governor says the state has started the payment process to add $400 to the weekly unemployment checks for tens of thousands of people who lost work.

The new Friday cases came as 30 of 102 counties reached two or more benchmarks that indicate the coronavirus is spreading there.

The cases were from 56,661 tests, resulting in a seven-day statewide positivity rate of 3.9 percent. There have been 4.6 million tests conducted in Illinois.

The total number of known infections in Illinois is 257,788, and the statewide confirmed death toll is 8,273 since the start of the pandemic.

BERLIN -- Officials in southern Germany say an American woman who lives locally and returned from vacation in Greece may have caused a spike of coronavirus infections and increased restrictions in the town of Garmisch-Partenkirchen.

The local council says the 26-year-old, who wasn’t identified, had visited several local bars. Council spokesman Stephan Scharf told news agency dpa that she had symptoms and was told to quarantine herself pending the result when she went for a test but failed to do so.

The woman had recently returned from a vacation in Greece. Scharf corrected information given earlier Saturday that the woman was a tourist who had come from the U.S.

All restaurants in the Alpine town of Garmisch-Partenkirchen must close at 10 p.m. for the next week. Germany, with a population of 83 million, has more than 260,000 confirmed cases and 9,351 deaths.

(This story has been corrected to indicate the American woman lived locally in Germany and returned from vacation in Greece. She didn't arrive recently from the U.S.)