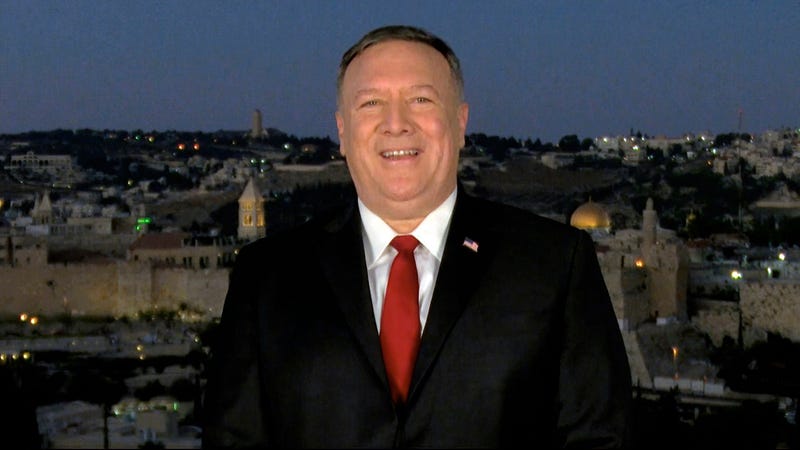 WASHINGTON (AP) — Secretary of State Mike Pompeo has plunged into the heart of the 2020 presidential race with a speech supporting President Donald Trump’s reelection at the Republican National Convention.

The speech was recorded in Jerusalem during an official visit to the Middle East and aired Tuesday at the RNC.

The address was roundly condemned by Democrats and others as an inappropriate breach of decades of diplomatic precedent and a possible violation of federal law prohibiting executive branch employees from overt political activism while on duty. Indeed, Pompeo himself had reminded State Department staffers of those restrictions only last month.

But while the venue and audience were extraordinary and perhaps problematic, the content of Pompeo’s roughly four-minute speech would not have been out of place in any number of his previous public appearances either at home or abroad.

Pompeo delivered standard recitations of GOP claims about the successes of Trump’s “America First” foreign policy against Russia, China and Iran. He said they made his family and all Americans safer. He spoke of the defeat of the Islamic State’s physical caliphate, Trump’s pro-Israel agenda and the president’s determined vigilance to guard against the “predatory aggression” of the Chinese Communist Party.

HERE’S WHAT YOU NEED TO KNOW ABOUT TUESDAY'S REPUBLICAN NATIONAL CONVENTION:

— Teen from video of 2019 Washington protest to address RNC

President Donald Trump hosted a naturalization ceremony at the White House in a video that aired Tuesday night at the Republican National Convention.

Afterward, Trump welcomed the five into the “great American family” and congratulated them, saying, “Great going.”

He told them: “You followed the rules, you obeyed the laws, you learned your history, embraced our values and proved yourselves to be men and women of the highest integrity.”

He says there is “no higher honor and no greater privilege” than being a U.S. citizen.

A granddaughter of the late evangelist Billy Graham says President Donald Trump is the only choice for voters of faith, adding that the Democratic ticket “leaves no room” for them.

Cissie Graham Lynch portrayed the Obama administration as one in which religious freedoms “were under attack.” But with Trump’s election, Lynch said “people of faith suddenly had a fierce advocate in the White House,” citing the appointment of judges “who respect the First Amendment.”

Lynch spoke Tuesday night during the Republican National Convention. She says the “Biden-Harris vision for America leaves no room for people of faith.“

Later, Trump’s daughter Tiffany attributed a litany of characteristics to her father’s supporters, saying “We believe in freedom of religion for all faiths.”

Trump has courted religious voters, seeking to portray Democrats as a threat to religious freedom. Evangelicals for Trump hosts weekly prayer calls. Vice President Mike Pence — a born-again Christian with a long track record in allying with fellow conservative evangelicals — has participated in a faith-centered tour in several battleground states.

The campaign also courts Roman Catholic voters and practitioners in a variety of other faiths.

Vice President Mike Pence is the star of a video airing during the Republican National Convention featuring the stories of six Americans whose lives have been helped by the Trump administration.

Jordan McLinn, who suffers from Duchenne muscular dystrophy, thanked Trump for signing the federal version of the “Right to Try” law in 2018.

Jack Hughes and his mother, Sarah, discuss how they used school vouchers to enroll Jack in a parochial school that better suited his learning needs.

And Lidia Brodine, a naturalized American originally from Honduras, talk about how the Paycheck Protection Program helped save her family’s new security business from folding once the pandemic hit.

A Kentucky teenager known for video of his interaction with a Native American man during dueling demonstrations at the Lincoln Memorial says the country must unite around a president “who calls the media out.”

Nicholas Sandmann assailed the media on Tuesday during the second night of the Republican National Convention, and contended that no one has been a victim of unfair media coverage more than President Donald Trump.

Sandmann asserted that the simple act of wearing a “Make America Great Again” cap made him the target of network and cable news networks.

Sandmann was among the students from Covington Catholic High School in Park Hills, participating in an anti-abortion march in Washington in January 2019. Footage of his interaction with Nathan Phillips, who was participating in a separate demonstration supporting Native American rights, spread widely online.

Sandmann later settled lawsuits against CNN and other media outlets.

A Wisconsin dairy farmer is thanking President Donald Trump for his support and claiming dairy farming is “roaring back,” though that’s not the case for hundreds of other farmers in the pivotal November swing state.

However, in 2018 alone, roughly 700 Wisconsin dairy farms went out of business, according to U.S. Department of Agriculture statistics, a trend accompanied by a spate of farmer suicides.

Among the factors was the renegotiated trade pact with Mexico and Canada, which blocked the export of a specific type of milk to Canada integral to cheesemaking. The provision hurt farmers notably in southwest Wisconsin, a region Trump won but where Democrats have posted victories since.

A speaker who had been scheduled to address the second night of the Republican National Convention has been pulled from the lineup after directing her Twitter followers to a series of anti-Semitic, conspiratorial messages.

Trump campaign spokesperson Tim Murtaugh says, “We have removed the scheduled video from the convention lineup and it will no longer run this week.”

Mary Ann Mendoza had been scheduled to deliver remarks Tuesday night to highlight the president’s fight against illegal immigration. Mendoza’s son was killed in 2014 in a head-on collision by a man who was under the influence and living in the U.S. illegally.

She and and other parents whose children have been killed by people in the country illegally have labeled themselves “Angel Moms” and have made frequent appearances at the White House and Trump campaign events.

Mendoza had apologized for the tweet, writing that she “retweeted a very long thread earlier without reading every post within the thread” and said it “does not reflect my feelings or personal thoughts whatsoever.”

A Republican familiar with the plans who spoke on condition of anonymity cited controversy as the reason for pulling Mendoza. The Republican wasn’t authorized to speak about the matter publicly.

An anti-abortion activist scheduled to speak during the Republican National Convention previously advocated for something called “household voting,” saying wives should defer to their husbands on making decisions related to politics.

Abby Johnson is slated to address the RNC on Tuesday, the virtual gathering’s second night.

In May, Johnson wrote on Twitter that she “would support bringing back household voting,” later explaining that, if spouses were to disagree, “Then they would have to decide on one vote. In a Godly household, the husband would get the final say.”

Johnson previously worked for Planned Parenthood, becoming a vocal abortion opponent after saying she quit years ago following an abortion of a woman who was 13 weeks pregnant.

She founded a ministry that lobbies abortion clinics employees to leave their jobs, and a movie based around her life story was released last year.

President Donald Trump is highlighting the pardon of a Nevada man convicted of bank robbery as part of the second day of programming at the Republican National Convention.

In a video expected to air Tuesday night, Trump says that the story of Jon Ponder is a “beautiful testament to the power of redemption.” Ponder now leads a program in Las Vegas that helps former prisoners reenter society, called Hope for Prisoners.

Trump has trumpeted criminal justice reform as part of his outreach to Black and evangelical voters.

The White House released a video of the pardon earlier Tuesday, which shows the president signing the document as Ponder and his wife look on.

The retired FBI agent who had arrested Ponder and went on to become one of his best friends also appears with Trump and Ponder.

A Republican congressional nominee from Georgia who supports the QAnon conspiracy theory and was congratulated by President Donald Trump on her primary victory has been invited to the Republican National Convention.

Marjorie Taylor Greene posted a photo of the invitation to her Twitter account on Tuesday. She wrote that she was “honored and thrilled to be invited to attend President Trump’s acceptance speech Thursday evening at the White House.”

A person familiar with Greene’s invitation says it is legitimate. The person was not authorized to speak publicly on the matter and spoke to The Associated Press on condition of anonymity.

Trump praised Greene as a “future Republican Star” after she won her primary earlier this month. He has courted the support of QAnon believers, saying, “I heard that these are people that love our country.”

Other Republicans, including Vice President Mike Pence and Republican House leader Kevin McCarthy, have rejected the conspiracy theory, which centers on an alleged anonymous, high-ranking government official known as “Q” who shares information about an anti-Trump “deep state” often tied to satanism and child sex trafficking.

Democrats are unloading on Secretary of State Mike Pompeo ahead of his planned address to the Republican National Convention from Jerusalem.

An aide to Democratic presidential nominee Joe Biden who has worked for the State Department calls Pompeo’s Tuesday speech “flat out disgraceful.” Aide Bill Russo says it's “an abuse of taxpayer money.”

Another top Biden deputy, Kate Bedingfield, blasts Pompeo as President Donald Trump’s “errand boy” and says he has a record of “repeated and blatant use of his office for overtly political purposes.”

Secretaries of state regularly travel abroad on behalf of a U.S. administration’s agenda, but Pompeo’s speech to a party convention from foreign soil is an outlier.

Russo mocks Pompeo’s explanation that he will address the GOP convention on personal time. Russo notes that the speech is still part of “official travel” and that taxpayer money “got him there” and is “paying for his protection” and for the “the staff on the ground” with him.

Sen. Cory Booker of New Jersey is a member of the Senate Foreign Relations Committee and says Pompeo’s move “violates his own policy.” Booker referred to Pompeo’s “memos and instructions” sent recently to his department’s employees.