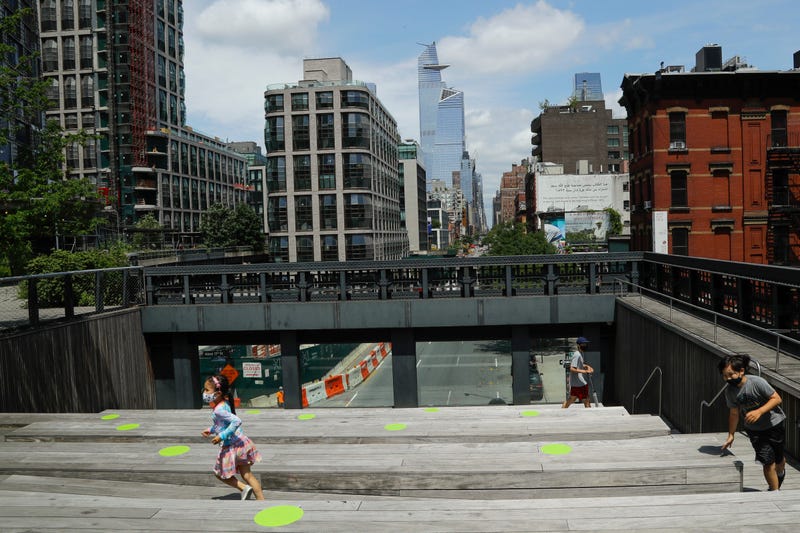 Photo credit Children wearing protective masks during the coronavirus pandemic play at the High Line Park, Thursday, July 16, 2020, in New York. The High Line opened today after having been closed the last few months during the pandemic. (AP Photo/Frank Franklin II)
By The Associated Press

ATLANTA — An official with the Centers for Disease Control and Prevention says the most recent count shows 342 U.S. children and teens have developed a serious inflammatory condition linked to COVID-19 infections.

Dr. Ermias Belay presented the data Thursday during a CDC online call for physicians. Belay says that among U.S cases reported as of July 15, the average age was 8 and most were in children aged 1 to 14.

That figures show that 40% of cases were in Latino kids and 35% were in Black children. One in four affected children were put on ventilators, but deaths have been rare.

The condition — multisystem inflammatory syndrome in children — is rare but can occur in children with current or recent COVID-19 infections. Symptoms include fever and problems in at least two organs, often including the heart. Digestive problems are common, and some cases have been mistaken with Kawasaki disease and toxic shock syndrome.

— Online classes only this fall in Richmond, Va.

— House Speaker Nancy Pelosi says President Donald Trump is like “the man who refuses to ask for directions.” She's asking for a course correction as coronavirus cases and deaths increase across the country.

— California’s order to close the doors of hair salons to help slow the rise of coronavirus cases threatens their survival after months of mounting bills, owners say.

Follow all of AP’s pandemic coverage at http://apnews.com/VirusOutbreak and https://apnews.com/UnderstandingtheOutbreak

SANTA FE, N.M. — People who have tested positive for COVID-19 in Arizona are being transferred to New Mexico hospitals because of staffing shortages and a lack of bed space, under a federal law that requires hospitals to accept patients from neighboring states if beds are available.

The Albuquerque Journal reported that Democratic Gov. Michelle Lujan Grisham said the transfer of out-of-state patients poses challenges as some New Mexico facilities are at or nearing capacity levels.

The governor announced his decision at a news conference Thursday.

He had long resisted issuing a statewide mask mandate. But he has come under increasing pressure as cases and hospitalizations mount and as several local governments have caused confusion by opting out of mask orders issued by their county’s health departments.

Numbers on Thursday jumped by more than 1,200 from the day before. It was the fourth time Mississippi has had a day-to-day increase of more than 1,000 cases, and the first time the number has topped 1,200.

The Health Department said Thursday that the state has had at least 39,797 confirmed cases and at least 1,308 deaths from the coronavirus as of Wednesday evening.

The state health officer, Dr. Thomas Dobbs, has said this week that several hospitals have no beds or very few beds available in their intensive care units.

NEW YORK — Gov. Andrew Cuomo says New York City is on track to move to the fourth phase of his gradual reopening plan, but his administration will review the latest infection data and decide by 4 p.m. Friday.

The rest of the state is in Phase 4, which typically permits opening malls and certain arts and entertainment centers and restarting professional sports games without fans.

But Cuomo says no “additional indoor activity” will open in New York in the fourth phase because of concerns about the spread of the coronavirus indoors. Cuomo hasn’t allowed New York City to open up indoor dining, unlike the rest of the state.

DHAKA, Bangladesh — Authorities say security officials in Bangladesh have arrested the owner of two hospitals that issued thousands of fake coronavirus test reports as he attempted to flee the country to India.

Mohammed Shahed, a member of the governing party who regularly appeared on TV talk shows, was arrested near the Indian border after a nine-day manhunt.

A police official says Shahed admitted after his arrest that his hospitals didn't have proper equipment to conduct coronavirus tests. The two hospitals hadn't renewed their medical licenses for years, but the Ministry of Health nevertheless signed a deal with Shahed to dedicate the hospitals to coronavirus testing and treatment.

The Republican governor issued the order Thursday after weeks of resisting such a requirement. His decision, which takes effect Monday, follows growing support from business and health leaders and comes a day after Bentonville-based Walmart said it would require customers to wear masks in all of its U.S. stores.

Hutchinson had resisted calls for a mask mandate but allowed cities to require them. COVID-19 cases have surged in Arkansas since the state aggressively began lifting restrictions in May to reopen its economy.

ATLANTA — Mayors in Atlanta and other Georgia cities want their requirements for wearing masks in public to remain in place, despite Gov. Brian Kemp forbidding cities and counties from mandating masks.

Statements by Atlanta Mayor Keisha Lance Bottoms and others Thursday deepened their defiance of the Republican governor. Officials in at least 15 Georgia cities and counties had ordered masks in public, with many angry with Kemp for sending a different message.

Kemp is encouraging people to wear masks, but declines to make it mandatory, unlike governors in 25 other states.

The governor has maintained for weeks that cities and counties don’t have the power to require masks in public, saying no local order can be more or less restrictive than his statewide mandates.

He made that prohibition explicit Wednesday, saying local governments couldn’t order masks in their own areas, including Atlanta’s airport. President Donald Trump was in Atlanta on Wednesday, talking about infrastructure repairs at airports.

Chicago Public Schools officials plan to release a framework this week and get feedback before making a final decision closer to the start of the school year. Leaders of the Chicago Teachers Union say there is no way to ensure the safety of students and teachers in school buildings this fall.

They also want charter schools to start the year online.

JOHANNESBURG — South Africa has surpassed Mexico and Chile with its number of confirmed coronavirus cases and now has the world’s sixth-highest caseload.

That’s according to the health ministry and data compiled by Johns Hopkins University. South Africa’s 324,221 confirmed cases are more than half of those across the African continent.

The country’s health ministry says 4,669 people have died. South Africa’s Gauteng province, home of Johannesburg and the capital of Pretoria, has become the epicenter of the pandemic in Africa with more than 117,000 confirmed cases.

One-quarter of the country’s population lives in Gauteng, with many people living in densely populated areas. Bandile Masuku, the province’s top health official, says the crisis could “expose the gaps” in the health care system.

GLEN JEAN, W.Va. — The Boy Scouts of America have postponed next year’s National Jamboree in West Virginia, citing concerns about the coronavirus pandemic.

The increasing number of cases and the pandemic’s persistence and unpredictability made it impossible for the Boy Scouts to comply with its “Be Prepared” motto, according to an announcement on the organization’s website.

The quadrennial Jamboree had been scheduled for July 21-30, 2021 at the Scout’s Summit Bechtel site.

Some counties and cities are under new restrictions and officials are urging the mandatory use of masks.

The northeastern powerhouse of Barcelona is where most of Catalonia’s new 1,300 infections have been identified according to the region’s health department.

By Thursday, 12 of Spain’s 17 autonomous regions had approved mandatory use of masks outdoors and regardless of whether social distancing of 1.5 meters (5 feet) can be maintained.

LONDON — British authorities say the city of Leicester will remain under local lockdown for at least two more weeks because coronavirus infection rates remain much higher than in the rest of the country.

Health Secretary Matt Hancock says schools and some non-essential shops can open. But restrictions remain on social gatherings, the closure of pubs, cafes and restaurants and a ban on leisure travel.

The city of 330,000 in central England was placed into lockdown two weeks ago when infection rate hit 135 cases per 100,000 people, three times the next-highest part of the country.

Hancock says the rate had fallen to 119 cases per 100,000, but “there is still a lot to do” and thanked people for their “perseverance” in staying locked down.

Leicester Mayor Peter Soulsby has urged the government to lift the lockdown for much of Leicester, saying postcode data shows infections are concentrated in inner-city areas or 10% of the city.

ST. PETERSBURG, Fla. — Florida announced a single-day record of 156 deaths from the coronavirus.

The state Department of Health reported 13,965 new coronavirus cases in Florida, bringing the total throughout the pandemic to nearly 316,000.

The U.S. Department of Labor also reported a surge in first-time filings for unemployment benefits in Florida. In the week ending July 11, there were 129,408 new filings, an increase of more than 62,000 from the previous week.

BELGRADE, Serbia — Serbia’s prime minister says the coronavirus spike was caused by large protests about the government’s handling of the crisis.

Prime Minister Ana Brnabic says the increase in COVID-19 cases in the country “is a direct consequence of the protest gatherings.” However, she provided no numbers for the capital of Belgrade or other Serbian cities where sometimes violent protests erupted more than a week ago.

The protests initially started July 7 when Serbia’s president announced Belgrade would be placed under a three-day lockdown following a second wave of confirmed coronavirus infections.

The demonstrations continued despite President Aleksandar Vucic suspending his plan to enforce the lockdown. Instead, the government banned gatherings of more than 10 people and required masks indoors.

Brnabic says Serbia has reported 383 new cases and 13 confirmed deaths in the past 24 hours. The national total is more than 19,700 cases and 442 deaths since the start of the pandemic.

THE HAGUE, Netherlands — The Dutch government aims to introduce a coronavirus tracking app nationwide on Sept. 1 to help rein in the spread of the virus.

Health Minister Hugo de Jonge says the app will roll out across the country once final security tests are completed and only if the country’s privacy watchdog gives its approval.

De Jonge says the app will help officials “get a grip on the virus and prevent infections” and “the more people who download the app, the better.”

Use of the app is voluntary and the government says it doesn’t store information about users or their locations. It’s intended to bolster efforts by local health authorities to track and isolate people who were in contact with people known to be infected.

Pierre Somse told a World Health Organization briefing “we are in a scarcity, a misery of tests.” He says his country of more than 4 million people is still waiting for testing supplies ordered via the WHO.

He called for more than just talk about global solidarity in the pandemic, especially for “small and fragile” states.

He notes rich countries like Britain conduct thousands of tests daily while his country struggles to obtain supplies for a few hundred.

He says without donations of testing materials from the Chinese, “we could not have done nothing, nothing at all.”

STOCKHOLM — Swedish prime minister defended the country not shutting down and less stringent methods for handling the coronavirus pandemic.

Prime Minister Stefan Lofven stressed in an interview with the Swedish newspaper Aftonbladet the key issue for the government during the crisis has been securing the functions vital to the Swedish society while “we try to limit the infection as much as possible.”

“It is a matter of protecting life, protecting health,” says Lofven, adding his government has worked hard to minimize the impact of the virus while noting there have been problems caring for the elderly.

On Thursday, there were 21 reported virus deaths in the past day. The total confirmed deaths in Sweden stands at 5,593 with 76,877 confirmed cases.