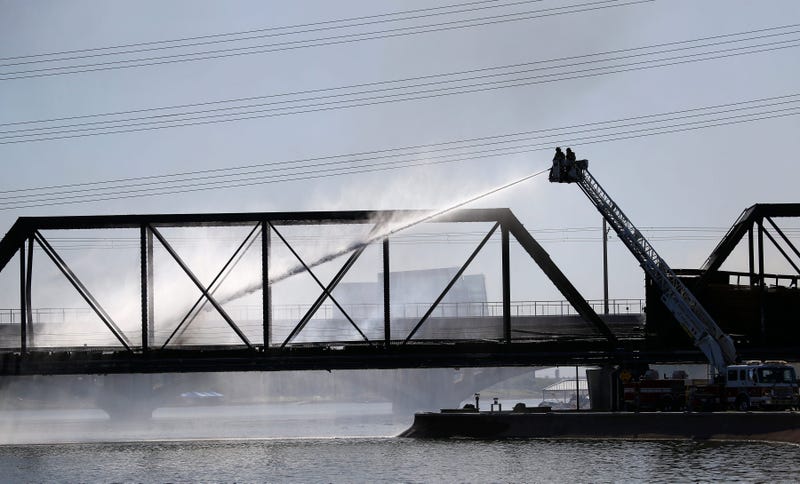 PHOENIX (AP) — A freight train derailed Wednesday as it traveled on a bridge that spans a man-made lake in a Phoenix suburb, setting the bridge ablaze and partially collapsing the structure, officials said.

Tempe police said there was another derailment in the same area last month that slightly damaged the bridge, but it's unclear if that led to the latest incident.

Union Pacific Railroad officials said 12 cars derailed on June 26 and the repairs were done within 48 hours. It also said the bridge had its annual inspection on July 9.

The derailment Wednesday occurred about 6 a.m. About 90 firefighters were dispatched to fight the blaze that followed, fire Chief Greg Ruiz said at a news conference.

Ruiz said crews were working to contain a leak from one derailed train car, and the liquid was going into a dry bed, not the lake.

None of the train's crew members were hurt but there was a report of someone suffering from smoke inhalation, said Tim McMahan, a spokesman for Union Pacific Railroad. He said he did not know how many crew members were aboard when the train derailed.

The train traveling from Tucson to Phoenix had 102 cars and between eight and 10 of them caught fire, McMahan said. Several carried lumber and the three that fell to the ground beneath the bridge were tank cars.

Two were carrying cyclohexanone, a pale and oily liquid that is toxic and flammable. McMahan said a third tank car was carrying a “rubber material" but did not provide further details.

McMahan said the tank cars were not involved in the ensuing blaze.

Investigators with the Federal Railroad Administration were dispatched to start a preliminary investigation. The National Transportation Safety Board will also investigate, officials said.

Fire witness Camille Kimball told AZFamily.com she was riding her bike in the park below the bridge minutes before the derailment.

“I turned around to look and got the fright of my life,” Kimball said. “Now there’s fire pouring into the lake from the middle of the bridge. ... It looks like a scene from hell, truly.”

The 2.5-mile (4-kilometer) Tempe Town Lake is is a popular recreation spot for jogging, cycling and boating close to Arizona State University.