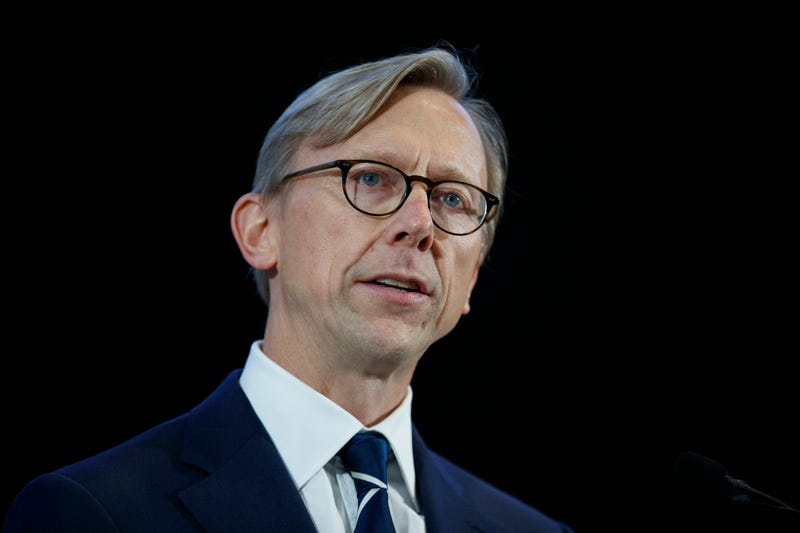 Photo credit FILE - In this Nov. 29, 2018 file photo, Brian Hook, U.S. special representative for Iran, speaks at the Iranian Materiel Display at Joint Base Anacostia-Bolling in Washington. The U.S. continues to push for an end of the four-nation boycott of Qatar, even after the hospitalization of Kuwait's ruling emir who led talks to resolve the yearslong dispute, Hook told journalists Sunday, July 26, 2020. (AP Photo/Carolyn Kaster, File)
By The Associated Press

WASHINGTON (AP) — The Trump administration’s top envoy for Iran is stepping down just as the United States tries to moves ahead with a major diplomatic effort that would extend a U.N. arms embargo against Tehran in the face of widespread international opposition.

Brian Hook announced his departure on Thursday, a day after Secretary of State Mike Pompeo said the U.S. would call for a U.N. Security Council vote next week on a resolution to indefinitely extend the embargo, which is due to expire in October.

That resolution is expected to fail, setting the stage for a showdown between the U.S. and the other Security Council members over the reimposition of all international sanctions on Iran. President Donald Trump withdrew the U.S. from the 2015 Iran nuclear deal two years ago but his administration argues it retains the right to invoke the “snapback” of U.N. sanctions because it is a council member. Others disagree.

Pompeo said in a statement that Hook “has been my point person on Iran for over two years and he has achieved historic results.” Hook will be replaced by Elliott Abrams, a noted hawk on numerous policy issues who is the U.S. special envoy for Venezuela.

Hook, an early arrival in the Trump administration, was seen by his counterparts and analysts as a pragmatist, intent on carrying out his instructions despite abrupt changes in policy. His seamless adaptation may have accounted for his longevity in an administration known for major foreign policy personnel upheavals.

As policy planning chief, Hook tried to strengthen the Iran deal, which Trump denounced during the 2016 presidential campaign as the worst deal ever negotiated and pledged to pull out from. Central to his efforts was trying to persuade the European participants in the accord — Britain, France and Germany — to impose tougher restrictions on Iranian missile activity. Those efforts failed.

Once Tillerson was fired and Pompeo took over with a presidential mandate to withdraw from the deal and Trump pulled out of the agreement, Hook's focus shifted to reimposing U.S. sanctions on Iran.

Since withdrawing, the U.S. has steadily ratcheted up pressure on Iran by imposing penalties on countries importing Iranian oil, declaring its Revolutionary Guard a "foreign terrorist organization" and killing a commander of the paramilitary organization this year in a missile strike in Iraq.

Under the deal orchestrated largely by the Obama administration, Iran was granted billions of dollars in sanctions relief in exchange for curbs on its nuclear program that the U.S. and others alleged was a cover for atomic weapons development. Once he became Iran envoy, Hook was in charge of identifying sanctions to be restored and lobbying Europeans and others to follow suit. Few have.

At the same time, Hook had some success in negotiating prisoner swaps with Iran, securing the release of two Americans in exchange for Iranians held in the United States. Hook twice flew to Zurich, Switzerland, to take custody of freed Americans.

Hook will be replaced after an as-yet undetermined transition period by Abrams, who will continue in his job as Venezuela envoy, Pompeo said. Abrams has led the administration’s push to try to force Venezuelan President Nicolas Maduro from power by backing his main rival Juan Guaido. It's an unfinished effort that Abrams will continue while serving as Iran envoy.

Abrams is perhaps best known for his role in the Iran-Contra scandal during the Reagan administration in which weapons were sold to Iran to support anti-communist rebels in Nicaragua. Abrams, then a National Security Council aide, was convicted of withholding information from Congress about the matter, but was pardoned by President George H.W. Bush.

Hook had given few people inside the administration advance notice that he intended to leave and on Wednesday had appeared at a session on Iran at the Aspen Security Forum. He had just returned to the U.S. from an extended trip to Middle East and Europe during which he tried to drum up support for the Iran arms embargo extension.