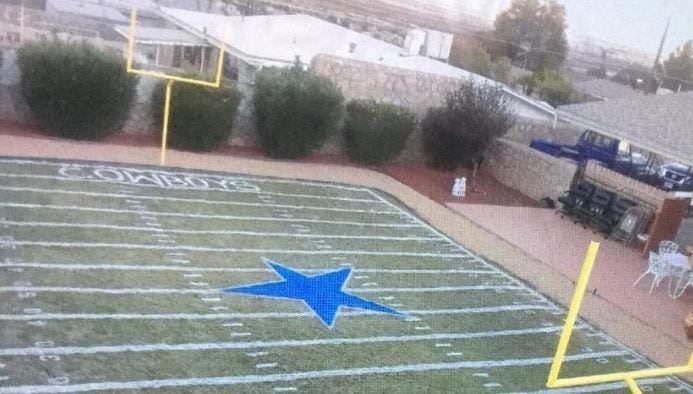 There's a good chance he's the biggest @dallascowboys fan. We'll talk with Jose Hernandez, who built a replica of the Cowboys field in his backyard! It's coming up at 4:30 on 1080 @KRLD & the https://t.co/TyoYA0ork6 App! #FinishThisFight pic.twitter.com/Lkg3RDwODJ

— John Liddle (@JohnLiddleVoice) January 9, 2019 So five years ago, when he and his wife were looking for a new home, he knew exactly what he wanted to do with his big backyard.

"I told my son ... I'm going to make a football field here," Hernandez told 1080 KRLD. "That was five years ago, but there's priorities. My family comes first. We fixed the house inside (first) and now it's my turn."

And when it was his turn, Hernandez made a beautiful replica of the Dallas Cowboys field, complete with the trademark blue star right at midfield.

"I'm not bragging but me and my son did pretty good with the goalposts. They're steel, they're made out of metal. I told my son 'we're going to do something good here,'" said Hernandez.

And it turns out, this field has been a good luck charm for the 'Boys.

"When I finished the field ... I wanted to finish it on Monday night against the Titans," he said. "Well, I didn't finish it till the next day, which was the best thing because they lost. And after that, they've been on a winning streak."

That's right. ... Since Jose finished his AT&T Stadium West, the Cowboys have won 8 of their last 9 games, including a playoff game. On a flight home from Denver, Jose went viral after he met fellow fan Kathryn Westphal.

Westphal asked Hernandez why he hadn't posted it to social media and he said he "was old school" and doesn't have an account. So she went ahead and posted it on her social media account and it quickly got thousands of views from jealous fans of America's Team.