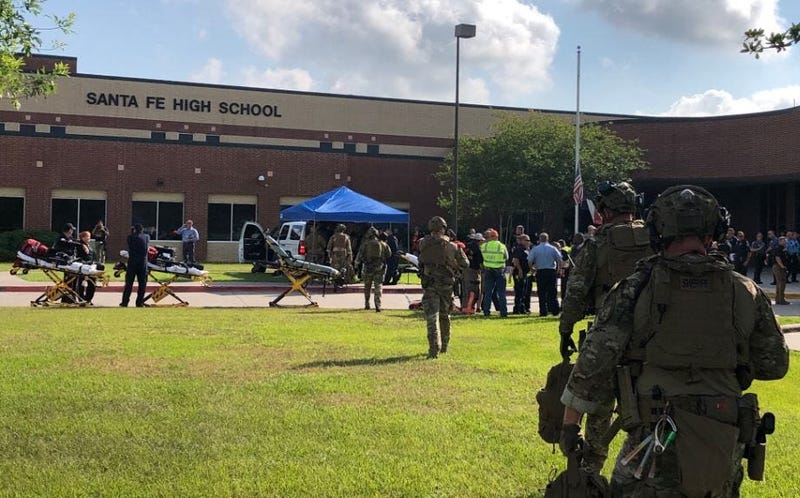 DALLAS (1080 KRLD) - The lawyer for the 18-year-old charged with the shooting at Santa Fe High School last year says Dimitrios Pagourtzis would not receive a fair trial in Galveston County.

A hearing in Galveston County is taking place this week.

Pagourtzis has been charged with capital murder for killing eight students and two teachers at Santa Fe High School last May; 13 others were injured. Pagourtzis was 17. If convicted, he could receive a sentence of life in prison with the possibility of parole after 40 years.

Pagourtzis appeared in court in person for the first time Monday. Prior to the start of the hearing, he had only appeared on video.

Family of victims sat behind prosecutors in the courtroom.

"I can truly say that I have forgiven him," says Sonia Lopez, whose daughter was injured in the shooting. "I really never had any hate toward him."

Pagourtzis' lawyer says publicity surrounding the case would prevent a fair trial in Galveston County. Nick Poehl says social media posts from people who live in the county show too many people there have existing opinions about what happened. Poehl says publicity led to the trials for the Oklahoma City bomber and DC Sniper to be moved.

The Galveston County district attorney cited other cases he says show that a defendant's notoriety does not necessarily lead to prejudice among jurors. Jack Roady says no legal guidelines exist that would prevent selection of a juror who knows a person affected by a case.

Roady says details have been held from media and the public, and that lack of information runs counter to Poehl's claim that publicity about the case could make it impossible to find an impartial jury.

The judge says he plans to make a decision by the end of the week.