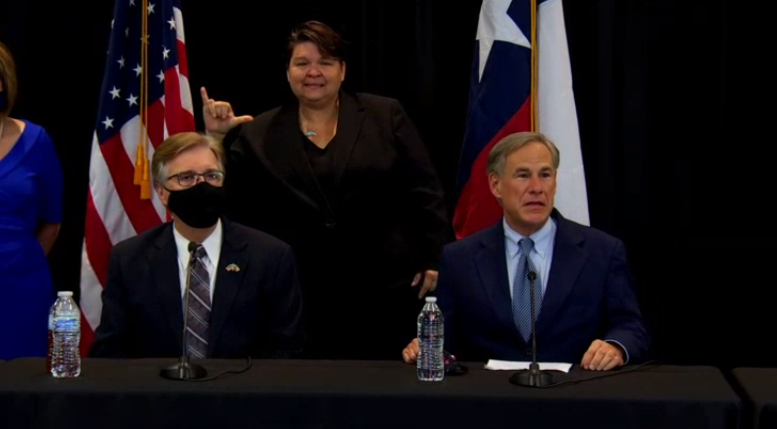 Flanked by Lieutenant Governor Dan Patrick, Speaker Dennis Bonnen, Fort Worth Mayor Betsy Price and others, Governor Abbott announced his proposal that any city that defunds police would have its property tax revenue frozen at its current level.

Governor Abbott and others singled out Austin, which Abbott says defunded police while the city has experienced the highest increase in murder rate in the nation.

"What they have done in Austin, should never happen in any city in the state" said Lt. Gov. Patrick. "We need every officer we can get on the street. We don't have enough now, we need to be investing in police."

Patrick also said the Texas Senate will make it priority to freeze property tax rate of any city that defunds police.

"What they have done in Austin, should never happen in any city in the state" Lt. Gov. Patrick https://t.co/kColOsxe0a pic.twitter.com/LMb1sdGUWk

Governor Abbott was very critical of the Austin city council's decision to reduce funding in that city's police department.

"When crime is on the rise, the last thing we want to do is defund the Police Department" said Abbott, highlighting the recent moves to cut $150 Million from the Austin Police Department's budget, roughly 34% of the department's $434 million total budget.

"Part of our job as state leaders is to ensure the safety and security of all Texans, and we will not allow this core function to be undermined by cities that seek to defund and dismantle law enforcement agencies that have a sworn duty to protect our communities," said Governor Abbott. "Defunding the police puts Texans in danger and invites lawlessness into our cities, and cities that endanger their residents should not be able to turn around and raise more taxes from those same Texans. I strongly urge the Texas Legislature to take up this important issue next session to protect their constituents and ensure law enforcement have the resources and support they need to protect their communities."

Governor Abbott says they are making the announcement today in Fort Worth because the city is "doing it right" when it comes to supporting law enforcement.