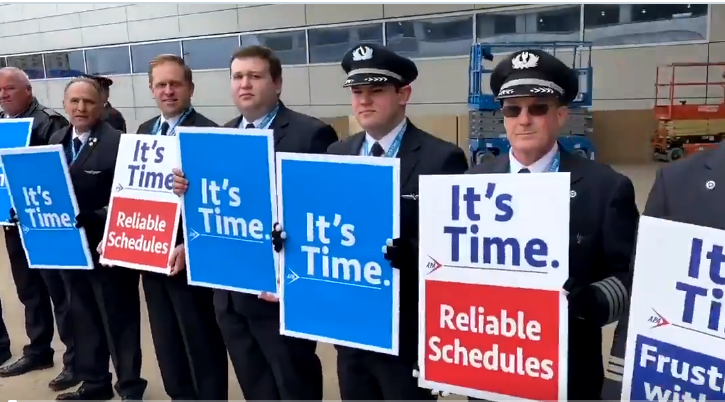 The pilots represented by the Allied Pilots Association stood on the curb across the entire length of Terminal D, holding signs that read, “it’s time.”

Among other things, the pilots are demanding more reliable scheduling.

The pilots say talks have gone on for too long, and it’s past time to reach a deal.

“It's been a year of talks,” says Capt. Tajer. “They haven't gone very well; and as of late, American hasn't proposed any ideas.”

Tajer says it’s past time for a deal to get done with the airline,

“We have ideas; we have solutions,” Tajer says. “We're in talks now, and American is in a crisis of operational reliability and financial performance, and we can be a part of that solution.”

American Airlines released a statement in response to the demonstration: "We look forward to continuing to negotiate with the APA and will return to the negotiating table in early February. We remain committed to delivering improvements in compensation and quality of life for American Airlines pilots."

The @AlliedPilots of American Airlines are staging a demonstration outside Terminal D at @DFWAirport, demanding a new contract with the airline that includes reliable schedules. Keep it tuned to @KRLD for details. pic.twitter.com/bAPDB6iuD8