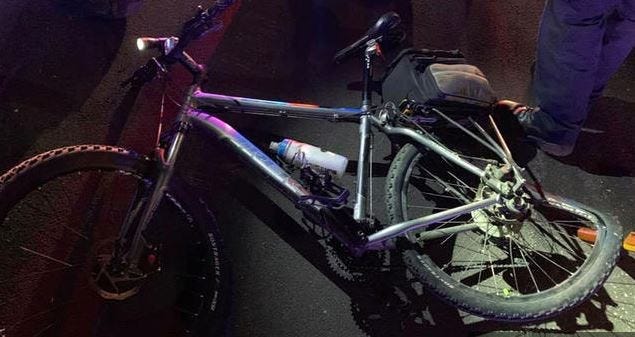 May 13, 2019 05/13/2019 4:40 pm
ARLINGTON (1080 KRLD) - Police in Arlington continue looking for the driver who hit a bicycle officer over the weekend.Investigators have used grainy surveillance video to gain information on the vehicle.

Update on Bicycle Officer StruckInvestigators have narrowed the suspect vehicle down to a black or dark colored Van or SUV with a glowing light on the dash (possibly a ride share service such as Lyft or Uber sign).Anyone with info asked to contact Det. Lawson 817.459.5635 pic.twitter.com/7EiYxyH8xO

— Arlington Police, TX (@ArlingtonPD) May 13, 2019 "We believe that the suspect is driving a black van or a black SUV with a neon light on the dashboard," says Lt. Christopher Cook. "They believe it is related to a rideshare service, possibly a Lyft."The officer was responding to an assault call at a restaurant on Collins St. across from AT&T Stadium early Sunday morning when he was hit from behind."Even though he had the approved bicycle lighting on the bicycle, the SUV or the van struck the rear tire, which caused the officer to be ejected into the air and land on his back," says Lt. Cook.The officer was treated at a hospital and released a few hours later."Luckily, when he was struck and ejected from the bike, he landed on his back, and he was wearing his helmet," Cook says. "So the helmet took most of the blow."Cook says he should return to duty later this week.

Arlington police asked anyone with information about the incident to call Det. Stephen Lawson at 817-459-5635, or contact Tarrant County Crime Stoppers at 817-469-TIPS.