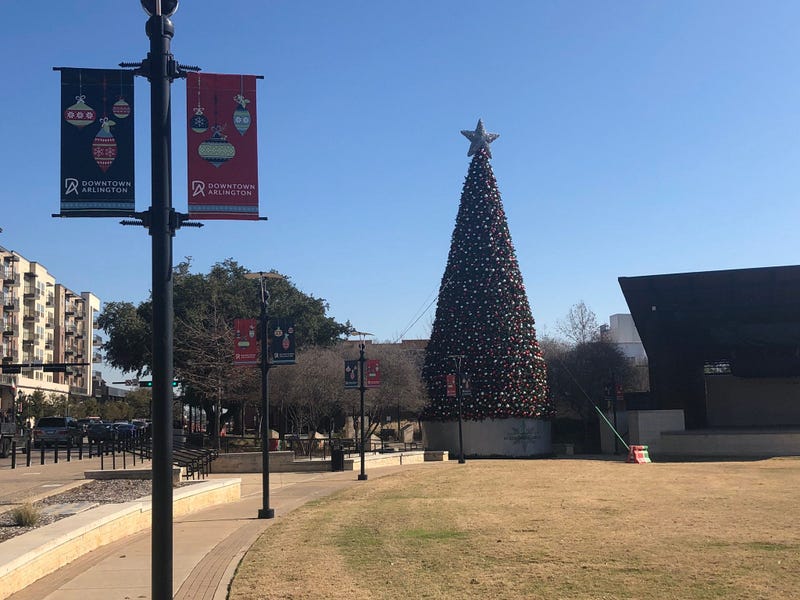 Music and other events, including pictures with Santa Claus, begin at Levitt Pavilion at 2 p.m. Saturday. The parade starts at Lampe St and W South St at 6 p.m.

The Christmas tree lighting will follow the parade at 7 p.m., and Arlington will show The Santa Clause at Levitt Pavilion after the lighting.

"We really get a lot of foot traffic, which is awesome," says Casey Slawson, the general manager of Mellow Mushroom in Downtown Arlington. "Everybody's just hanging out, watching the parade and the tree lighting. It's always a fun event."

Slawson says the construction of apartments near UT-Arlington and the opening of more business have helped downtown grow into a destination since the restaurant opened almost ten years ago.

"We're seeing an increase, especially more and more UTA students, 101 Center Street and the apartments they're putting up. Those are bringing more people downtown, and we're certainly seeing the effects of it," he says.

​The Vandergriff family has donated a poinsettia tree that is now on display at George W. Hawkes Downtown Library. Former Mayor Tom Vandergriff first put the tree on display in 1986.

"It's very gratifying for me, and for my parents," says Vic Vandergriff. "Somewhere, they're both smiling. That's for sure."

Vandergriff says the library, which opened last year, shows how much Downtown Arlington has changed.

"It's a great feeling, and it's been made better over the past ten years with so much growth and development there," he says.

Slawson, the general manager at Mellow Mushroom, says he is glad Arlington is rebuilding Abram Street, reducing the number of lanes and adding sidewalks and bike lanes. He says that has led to more people spending an entire day downtown, and as more apartments have opened, renters are more likely to stay nearby when they want to go out.

"You don't want it to feel like Dallas, in a sense, where it gets all chaotic," he says.