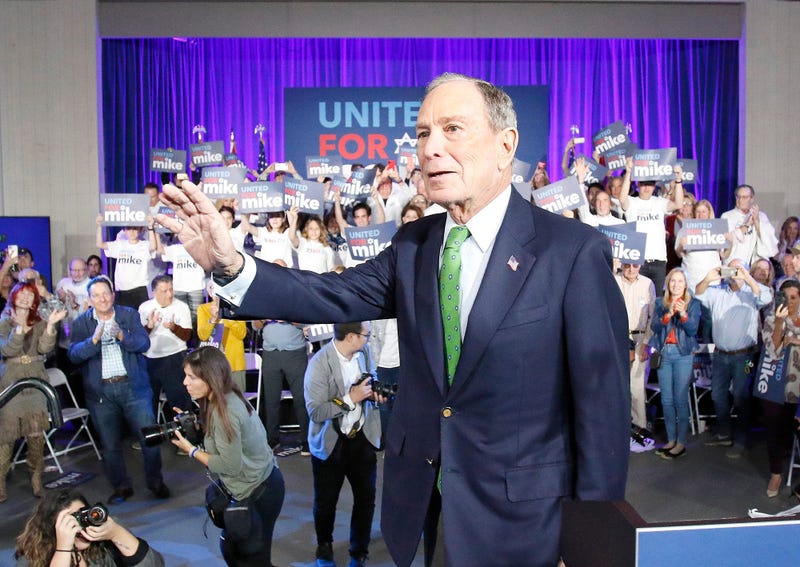 It was a stunning collapse for the former New York City mayor, who had his 2020 hopes on the Super Tuesday states and drained more than $500 million of his own fortune into the campaign.

Bloomberg announced his departure from the race after a disappointing finish on Super Tuesday in the slate of states that account for almost one-third of the total delegates available in the Democratic nominating contest. He won only the territory of American Samoa, and picked up several dozen delegates elsewhere. Biden, meanwhile, won big in Southern states where Bloomberg had poured tens of millions of dollars and even cautiously hoped for a victory.

Three months ago, I entered the race to defeat Donald Trump. Today, I'm leaving for the same reason. Defeating Trump starts with uniting behind the candidate with the best shot to do it. It's clear that is my friend and a great American, @JoeBiden. pic.twitter.com/cNJDIQHS75

Two of his former Democratic rivals, Amy Klobuchar and Pete Buttigieg, dropped out of the race and endorsed Biden as the moderate alternative to Vermont Sen. Bernie Sanders just the day before Super Tuesday.

Bloomberg ran an unprecedented campaign from the start. His late entrance into the race in November prompted him to skip campaigning in the first four voting states of Iowa, New Hampshire, Nevada and South Carolina. He hung his success on Super Tuesday, spending at least $180 million on advertising in those states, but had planned to continue deep into the primary calendar, already spending millions on advertising in states like Florida, Michigan and Pennsylvania. Before results poured in on Tuesday, he projected confidence while campaigning in Florida, only to have his aides say the campaign would reassess the next day.

Voters ultimately rejected Bloomberg's argument that he was the candidate best poised to take on Republican President Donald Trump. The president, for his part, had paid close attention to the Democratic nominating contest and had been especially fixated on Bloomberg. Trump regularly railed against his fellow New Yorker on Twitter, mocking his short stature by calling him “Mini Mike" and claiming Bloomberg was the candidate he wanted to run against. On Tuesday, he called the results a “complete destruction” of Bloomberg's reputation.

Bloomberg, 78, is one of the world's richest men, worth an estimated $61 billion. His fortune flows from the financial data and media company that bears his name, which he started in the 1980s. In addition to serving 12 years as New York mayor, he endeared himself to progressive groups by pouring hundreds of millions of dollars into fighting climate change and curbing gun violence.

In the early weeks of his campaign, he used his vast fortune to introduce himself to voters outside New York on his own terms, and his rivals accused him of trying to buy the party's nomination and the White House. As voting drew closer, the former Republican was forced to confront his Democratic rivals head on by appearing alongside them on a debate stage. His first performance was shaky and uneven and caused voters to view him with a more critical eye.

He proved unable to overcome consistent criticism of New York's use of the stop-and-frisk police practice under his tenure as mayor, which disproportionately targeted young black and Latino men for searches aimed at finding weapons. The practice ended after a federal judge declared it unconstitutional, and Bloomberg apologized for using it weeks before announcing his presidential run.

He similarly faced pointed criticism — primarily from rival Elizabeth Warren — about the treatment of women at his company, Bloomberg LP. Under pressure from Warren, he said in mid-February he would release three women who sued him for harassment or discrimination complaints from confidentiality agreements. Women who worked for Bloomberg were featured in a commercial praising Bloomberg's and the company's treatment of women, and his longtime partner Diana Taylor defended him as a champion of women.

Bloomberg was dogged by accusations he was trying to buy the Democratic presidential nomination. His vast fortune proved a perfect foil for Sanders, who has said billionaires should not exist at all. Indeed, Bloomberg had a vast circle of influence from his spending on key causes like gun control as well as his philanthropic efforts to boost American cities and provide leadership training for mayors. Dozens of prominent mayors rallied behind his candidacy.

That, combined with Biden's resurgence in South Carolina and the rallying of the party's moderate wing behind him, doomed Bloomberg's case that he was the best candidate to take on both Sanders and Trump.

What's next for Bloomberg is unclear. He'd pledged to keep campaign offices open in key general election battleground states to help the Democrats defeat Trump even if he lost the party's nomination. But Sanders' campaign has said they do not want the help.

This is a developing story, follow 1080 KRLD for more information.