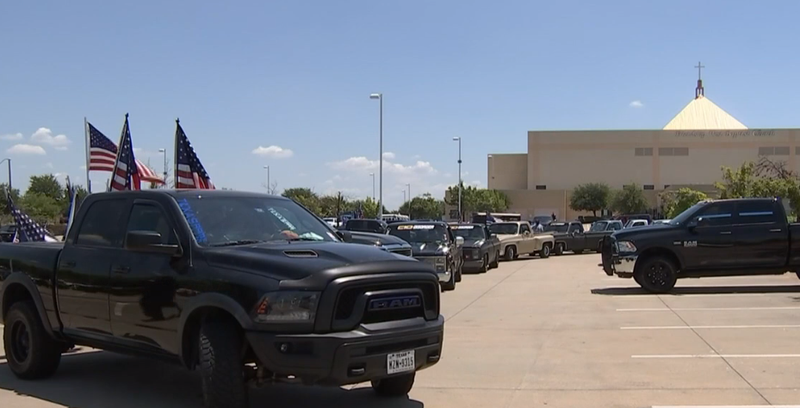 The pastor of a church in Oak Cliff says almost 1,000 cars, jeeps and motorcycles parked in his lot Sunday without permission as part of a "Back the Blue" event.

Dallas Police say the Texas Ram Club and North Texas Jeep Club had started a caravan in Bedford and stopped in the church's parking lot about 11:50 Sunday morning.

Frederick Haynes, pastor of Friendship West Baptist Church, has been active in "Black Lives Matter" events and says that is why the group parked outside his church.

"They're saying this was just about supporting 'blue lives,'" Haynes told his congregation. "I said, 'Well your blue lives support has Trump signs and confederate signs. That translates into a KKK rally.'"

Haynes says he did not give permission to the group, but organizers with "Back the Blue Cruise" say someone at the church had been given permission to use the parking lot.

"I don't know where the communication breakdown was, but I do want to say to that church, from the bottom of my heart, I apologize for any kind of misconception or misunderstanding or anything. That is not our heart," says organizer Nathan Abrams.

Abrams says the group did not have any political ties; he says they simply wanted to "reach out to the officers in the community."

Sunday evening, several dozen demonstrators with Black Lives Matter gathered outside Dallas Police headquarters. Police say both the event outside the church and near headquarters were peaceful.

Dallas police say organizers of the "Back the Blue Cruise" had asked for a police escort. The department says it does not provide escorts during caravans, but when the group caused congestion and "a severe traffic hazard" at the one entrance to Friendship West, officers did respond to provide traffic control to keep cars moving on Wheatland Road.