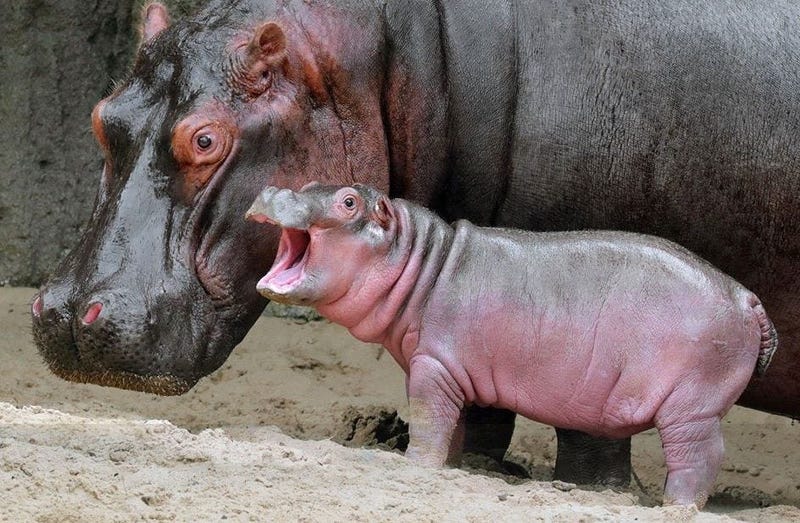 ------The @DallasZoo's baby hippo is named Adanna! Meaning "father's daughter", it's also a tribute to Adhama, the zoo's male hippo who passed away-- pic.twitter.com/lLMgPCZXMZ

At a gender reveal party today, they announced the baby is a girl. They've named her Adanna, a name from the Igbo tribe native to Nigeria.

"It means 'father's daughter' or 'father's pride'," says Matt James, the zoo's senior director of animal care. "It's also a tribute to her late father Adhama, who we lost last year."

-- or --? @DallasZoo revealing the gender of their new baby hippo! How cute is it here using mom as a couch? -- @KRLD pic.twitter.com/KwvPjK281E

Adhama was the zoo's only male hippo, and died suddenly last October.

Adanna and Boipelo have made their public debut to visitors, but their bond is still growing. James says Boipelo is a very attentive mom, especially when she's helping her baby breathe at the water's surface.

"She'll find a shallow spot where she can lie down, and that allows Adanna to perch on her back and come up for air regularly," he says. "Mom can hold her breath for several minutes, but the baby is still working on that kind of stamina."

Adanna weighed about 80 pounds when she was born. In the last several weeks, her growth has nearly doubled.