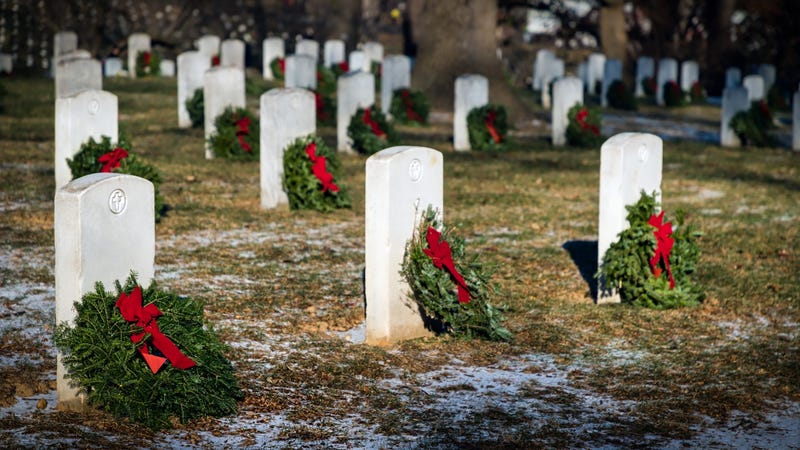 DALLAS (1080 KRLD) - Time is running out for one local group to meet its goal in honoring servicemen and servicewomen buried in the Dallas Fort Worth National Cemetery.

The DFW Chapter of Wreaths Across America wants to collect 46,000 wreaths this year - that’s just enough to decorate every grave in the cemetery. So far, the group only has 18,000. Their deadline? December 2.

Chris Bush is the Reach Across America Coordinator at the DFW National Cemetery. He and his wife Mary started the DFW Chapter of Wreaths Across America after their son, Cpl. Peter Courcy of Frisco, was killed in action in Afghanistan in 2009.

"There were no wreaths being laid at the DFW National Cemetery," Bush said. "So we raised 250 wreaths in 2009, and we've been at it ever since."

Since then the event has grown exponentially. Last year 24,000 wreaths were laid by 6,000 volunteers attending the event. Bush says everyone is welcome at the ceremony, kids included, and volunteers choose which graves to lay wreaths on. It’s one of the biggest events the Dallas Fort Worth National Cemetery holds.

"The only thing that we don't have is enough wreaths for all of the gravesites,” Bush said.

Every year the goal is 46 thousand. So far, the group has yet to reach it.

"The best we've ever done is 28,000 wreaths,” Bush said. “We've never covered the entire cemetery, but that's always been the goal.”

One wreath is $15, and donations can be made by texting "Wreath1" to 20222. You can also donate via the Wreaths Across America Website.  For every two wreaths donated, an extra wreath will be included. December 2nd will be the last day to donate.

The wreath laying ceremony will begin at 11 a.m. December 14. Everyone is welcome to volunteer.

“The only thing we ask people to do before you lay the wreath, is to look at the headstone, and say that name.” Bush said. “That name may not have been said since the last time we laid a wreath there. We want to remember service and we want to honor service. One way to do that is to say that name.”