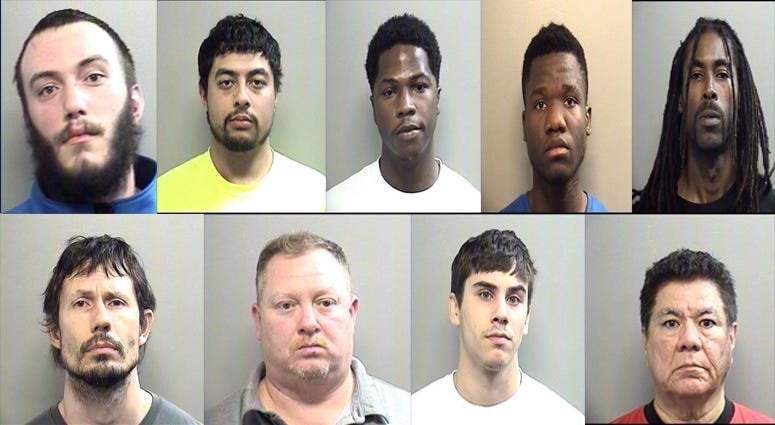 "We had detectives that were posing as children — 13, 14, 15, 16-year-old boys and girls — online, trying to see what type of criminal element there was out there that may want to meet up," says Arlington Police Lt. Christopher Cook.

Several arranged to meet up with who they thought was a child.

"In this particular two-day operation, we had eight suspects arrive that thought they were going to meet these children when in reality they were faced with meeting police officers," says Lt. Cook. "Each of the defendants in these cases were charged with felony online solicitation of a minor."

Also, David Wilson, 38, was arrested on a pair of drug charges, unlawful carrying of a weapon and other misdemeanor warrants.

Police say Wilson drove Carter to the location and is not charged with online solicitation of a minor.

"We also are in the process of writing ten or so arrest warrants with the help of DPS and the sheriff's office on people that agreed to meet up with what they thought were minor children; however, they either failed to meet or maybe they passed by the location and saw police officers or police cars, and so they drove off," Lt. Cook says.

Cook says the results of the sting operation are both successful and alarming at the same time.

"It certainly shows that there are still people out there that will try to exploit (and) take advantage of our minor children," says Cook. "And that's why we're doing this."

music
AC/DC's Brian Johnson reveals the reason he always wears his iconic cap
music
It might not be 'Sour Candy,' but Lady Gaga is giving us ‘Chromatica’ themed Oreos
sports
Buster Olney: ‘Rival executive’ expects Kluber to sign with one of Yankees, Red Sox or Mets
sports
Kevin Durant denies speaking with James Harden about Nets: 'They're making these stories up'
music
Keke Palmer posts inspiring PCOS makeup-free acne photo: 'I know this is not me’
music
Harry Styles answers critics perfectly with post calling for the return of 'manly men'