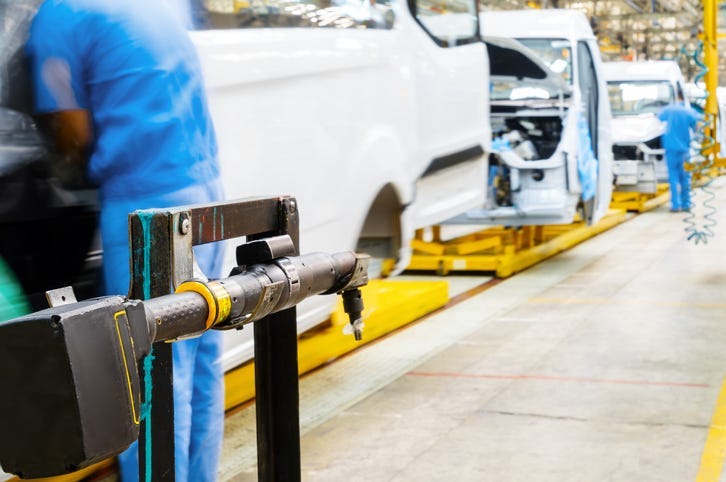 ARLINGTON (1080 KRLD) - Employees are resuming production Monday at the General Motors plant along Highway 360 in Arlington for the first time since March.

Under Texas Governor Greg Abbott's timeline to reopen the state's economy, manufacturing facilities were among businesses allowed to reopen Monday.

In Arlington, 4,000 employees were laid off in March. GM and the United Auto Workers says about 1,000 agreed to return on as volunteers to prepare the plant to reopen.

Employees taped out six foot distances in break rooms and moved equipment in areas where social distancing is possible. In areas where employees cannot work six feet apart, they will wear masks and other protective equipment.

"There's been an awful lot of work to get the plant prepared for the new architecture, so we've been living under these protocols for the past few weeks," says GM's Jim Glynn.

Glynn says employees will have their temperature checked when they report to work. They will be asked about any symptoms they might be feeling and undergo screening for COVID-19.

"Right now, our focus is first on the employees' safety and to make sure people are comfortable with these protocols and understand how they work, and how they'll protect you," Glynn says. "Really, it's going to be a phased-in approach. Our goal is not speed right now, it's more comfort for our people."​

GM says it will prop open doors to improve ventilation and prevent "high touch" situations where many people are opening and closing the same doors.

"I'm comfortable with the entrance into the work sites," UAW Region 1-D Director Steve Dawes ​said after touring several plants in the Midwest. "We've still got some hurdles to go over with six foot distancing."

GM says it will use the same protocols at other factories.