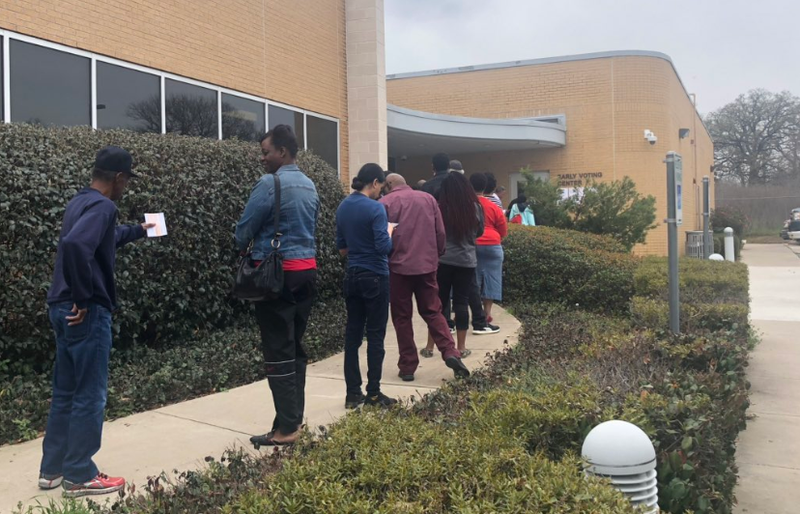 FORT WORTH (1080 KRLD) - Some voters in Tarrant County say they spent more than an hour waiting to vote in Tuesday's primary. The Tarrant County Elections Administrator says almost 125,000 people voted early, about 11 percent.

When polls opened at 7 a.m., four people were waiting to vote outside Trinity Episcopal Church near TCU.

"I vote every single year. I live here, right in the community, and I like to beat the rush," the man standing in front said. He had pulled in about 6:45.

Among primary races in Tarrant County, Kay Granger is running against Chris Putnam for the Republican nomination for the 12th Congressional district. Granger has held the seat since 1996 and was endorsed by President Trump; Putnam was endorsed by the Tarrant and Wise County sheriffs. Two Democrats, Danny Anderson and Lisa Welch, are running for the nomination.

Just look at that line! #SuperTuesday has voters out all across #Dallas. Are you tuning in? We’ve got live #election coverage all day on @KRLD. pic.twitter.com/LrWIVsrFKi

Kenny Marchant is retiring from Congress. His district covers parts of Tarrant, Dallas and Collin Counties. Five Republicans and seven Democrats are running for that nomination.

This year, some voters say an internet outage and new computer system led to longer lines at some locations in Tarrant County.

"I've never seen those before. It's different from four years ago. I can see they are from looking in the window," one woman said while standing in line to vote in South Fort Worth. "I hope they'll walk me through it. I don't know what to do."

At another polling place near Berry and Miller, some say they had waited in line for more than an hour.

"It's not a long line to me," the woman standing behind him said.