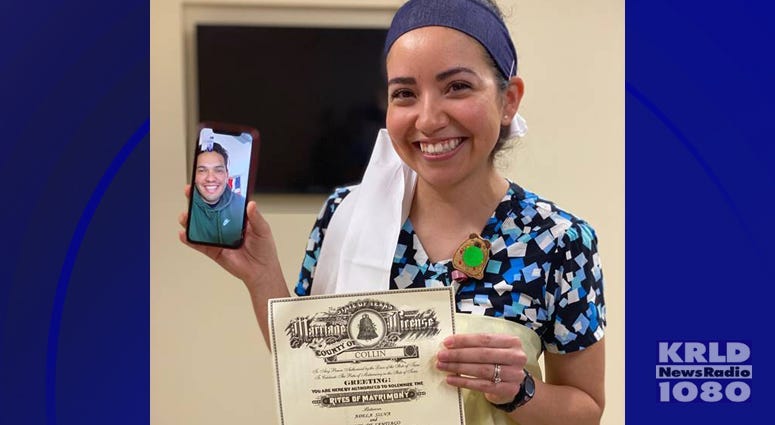 The concept of "social distancing" was taken to a whole other level on April 28, when a wedding was performed at a hospital in Dallas, while the groom participated from another city.

Adela Silva, a registered nurse at Children's Health in Dallas, and her fiancee, Erick de Santiago, had planned for their wedding to be May 1. But COVID-19 made a traditional wedding an impossibility.  Their wedding was postponed indefinitely, and with courthouses closed, the couple didn't think they had anywhere to turn.

That's when a co-worker of Adela's at Children's Health, who also happens to be an officiant, stepped up and offered to perform the wedding.

So to avoid breaking social distancing rules, Adela schemed with the co-worker to hold the wedding in the hospital break room, and have Erick agree to his side of the pact from home over FaceTime.

But then co-workers started getting involved.  The team at the Pauline Allen Gill Center for Cancer and Blood Disorders took over and threw Adela and Erick the best impromptu virtual wedding ever held.

"We just used (blown up) gloves as the bouquet...we used one of the PPE gowns as my dress, and a pillowcase as my veil," Adela remembers.

Erick even got emotional seeing his blushing bride crushing that PPE gown.

"I could see her through video when she came in," said Erick.  "I had a knot in my throat for sure.  It played out real well.  It was awesome."

Then the crew on Adela's floor put together a touching reception later in the day.  It was complete with a cake, balloons and sparkling grape juice.

"It was sweet, I had no idea they were planning it!" Adela said.

And more than forming a bond between two lovers, it lifted the spirits of the employees at Children's Health during a difficult time.

"It went futher than just being 'our day,'" said Adela. "It was a bright light in a dark time."