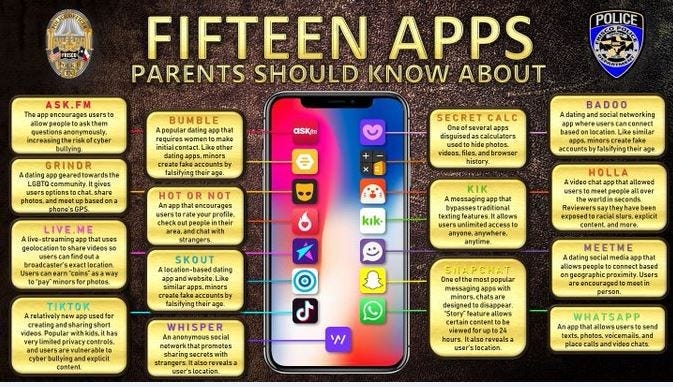 FRISCO (KRLD) - As the start to the 2019 school year approaches, Frisco Police are warning parents they should be monitoring the apps their children have on their smartphones.

Frisco Police put out a list of apps they say parents should know about, or at least know what the app does and how it could be used inappropriately.

Officer Grant Cottingham with Frisco Police says many apps have location services, which makes it easier for predators to find the exact location of your child.

Cottingham says they released the list of apps with the intent of being a conversation starter for parents to talk to their kids about the potential dangers whether they be child predators or cyberbullying.

Here is the list of apps Frisco Police said parents should watch out for:

Ask.FM – This app encourages a user to allow people to ask them questions anonymously, increasing the risk of cyberbullying.

GRINDR – A dating app geared towards the LGBTQ community. It gives users the options to chat, share photos and meet up based on a phones GPS.

Live.me – A live-streaming app that uses geolocation to share videos so that users can find out a broadcaster’s exact location. Users can earn ‘coins’ as a way to ‘pay’ minors for their photos.

TikTok – A relatively new app used for creating and sharing short videos. Popular with kids, it has very limited privacy controls and users are vulnerable to cyber bullying and explicit content.

Hot or Not – An app that encourages users to rate your profile, check our people in their area and chat with strangers.

Snapchat – One of the most popular messaging apps with minors, chats are designed to disappear. “Story” feature allows certain content to be viewed for up to 24 hours. It also reveals a users location.

Baddo – A dating and social networking app where users can connect based on location. Like similar apps, minors create fake accounts by falsifying their age.

Holla – A video chat app that allowed users to meet people all over the world in seconds. Reviewers say they’ve been exposed to racial slurs, explicit content and more.

MeetMe – A dating social media app that allows people to connect based on geographic proximity. Users are encouraged to meet in person.