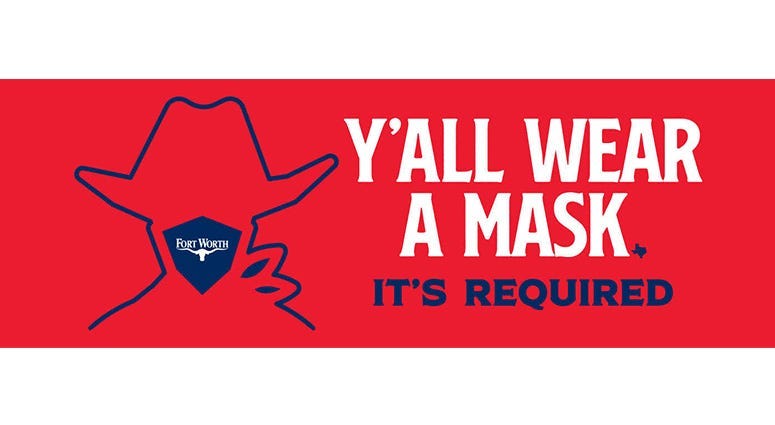 TARRANT COUNTY (1080 KRLD)- Additional mayors in Tarrant County have joined the "Y'all Wear a Mask" campaign. The campaign started in Fort Worth in June.

Now, Whitley and the mayors of Arlington, Burleson, Kennedale, North Richland Hills and Southlake have joined the campaign, which will include commercials and print and online advertisements.

Williams says the need to eradicate the virus is especially pronounced in Arlington because the city is losing tax revenue that would normally come in from Texas Rangers games and events at AT&T Stadium.

"We want to be able to get back to be being able to watch sporting events. We've got to beat this virus. We're not done yet," he says.

Williams chairs the Metro Economies Committee of the U.S. Conference of Mayors.

"I've been on Zoom calls and phone calls with mayors all across the country, and the stories are similar. Our businesses are struggling, revenues are down and cities all have to cut our budgets and tighten our belts," he says.

The Arlington City Council has begun discussions for next year's budget. The proposal includes a $518 million budget that would include a property tax rate reduction for the fifth straight year.

But the budget would also include a hiring freeze, employee travel freeze and reduction of expenses by ten percent. Arlington would also refinance bonds for a lower interest rate.

The city plans to hold a series of public meetings and vote on the budget in September.