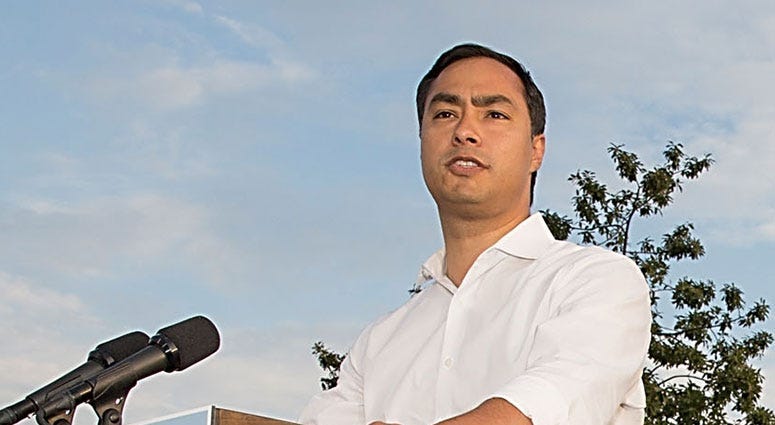 (1080 KRLD) - The resolution to kill President Trump's emergency declaration at the border passed both houses of Congress was authored by San Antonio Congressman Joaquin Castro.

President Trump has promised a veto.  Castro says he looks forward to the opportunity to rally votes for an override.   "If the president declared a national emergency because Mexico wouldn't pay for the wall, and Congress wouldn't pay for the wall.  If he did that unilaterally. imposed it on the people of the United States and the people of Texas, then we would fight him every way that we could."

Castro called the emergency declaration a power grab.   "If we don't stand up together as Republicans and Democrats and fight back, 20 years from now we'll be talking about how it was this moment the presidency usurped enormous power from the Congress."

Castro thanked the 12 Republican senators who crossed the aisle to support his resolution designed to kill President Trump's emergency declaration at the Southern Border.  He chided others who did not.   "Unfortunately, in Texas that did not include either of our senators, Senators Cornyn or Cruz, who showed weakness today, who showed timidity, who betrayed the people of Texas in favor of Donald Trump."

"Hi everybody. I'm Joaquin Castro representing San Antonio, Texas and the author of H.J.Res.46, which was just voted upon by the United States Senate.

"I want to say first thank you to the Democratic and Republican Senators who stood up for the Constitution today and the balance of powers between the Presidency and Congress, the Executive and the Legislative branches of government.

"There has never been, according to the people that live along the border, an emergency at the border.

"What we've seen over the last few years, unfortunately, is the President fear mongering-scapegoating immigrants. There is a humanitarian crisis, but there is no invasion.

"Unfortunately, the President has built his political career on the backs of immigrants and desperate people seeking refuge in this country. To do that, he declared a national emergency.

"We were successful in the House, with 245 votes, also in a bipartisan way to terminate the President's emergency declaration. And I'm proud to say that 59 Senators stood up to the President today and stood up for the Constitution.

"Unfortunately, in Texas that did not include either of our senators, Senators Cornyn or Cruz, who showed weakness today, who showed timidity, who betrayed the people of Texas in favor of Donald Trump.

"I look forward-I realize that the President is very likely to veto this bill, this resolution. We look forward to the opportunity to try to rally votes to override that veto. It's not lost on me how difficult it is to override any veto by a President.

"Some people will say that today's vote falls short of a veto override number needed to combat what the President is going to do, which is likely veto this.

"I believe that there is an incredible legal significance to today's vote. Think about it: both chambers of Congress, one Democratic and one Republican, voted to terminate the President's emergency declaration. As the courts review this, that will be a significant legal fact.

"And so, I look forward to watching the debate in the courts.

"I'm also concerned if Congress allows this to stand if the courts allow it to stand, the precedent that it will set for future Presidents-Republican and Democrat. And even for this President. President Trump has come back and asked for $8 billion for a wall.

"If the Congress allows this emergency declaration to stand, the President is likely to go back and do this again next year, or the following year if he's able if he's reelected.

"Future Presidents are likely to do this for other things that they would prefer to see in law, even if the United States Congress refuses to give them the money under their constitutional authority. With that, I'll be glad to take a few questions."