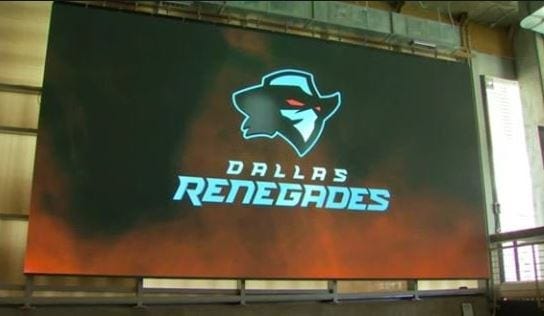 ARLINGTON (1080 KRLD) - The season for the reincarnated XFL begins this weekend​, 19 years after the league's first attempt. The XFL has two teams in Texas: the Houston Roughnecks and Dallas Renegades.

The Renegades are moving into Globe Life Park, which was vacated by the Texas Rangers after last season. The team says it worked with the Rangers to reconfigure the ballpark for football.

"The ballpark's awesome," says Bob Stoops. The former Oklahoma Sooners football coach was hired as head coach and general manager of the Renegades. "The turf's fantastic, bringing bleachers in and knocking some out over here. It works great."

"It really does look like a football field, and we can't wait for fans to see what it looks like and enjoy some football there," says Renegades President Grady Raskin.

The Renegades host the St. Louis BattleHawks Sunday at 4 p.m. and will host five games through April 9.​ The Arlington Convention and Visitors Bureau says the XFL will bring crowds to the Entertainment District at a time when the Cowboys and Rangers are both off.

"Arlington all-around has been on an incredible trajectory of exciting growth over the last five or seven years," says Arlington CVB President and CEO Ron Price.

Price says the addition of the XFL and Six Flags Over Texas' decision to open year-round benefit the entire city, not just the Entertainment District.

"We're seeing a lot of visitors coming into Arlington come for these major events, but they are migrating into downtown because of all of the great and exciting things that are there," he says.

The XFL's Houston Roughnecks host the Los Angeles Wildcats Saturday. Friday morning, tickets were still available for both the Renegades' and Roughnecks' games.