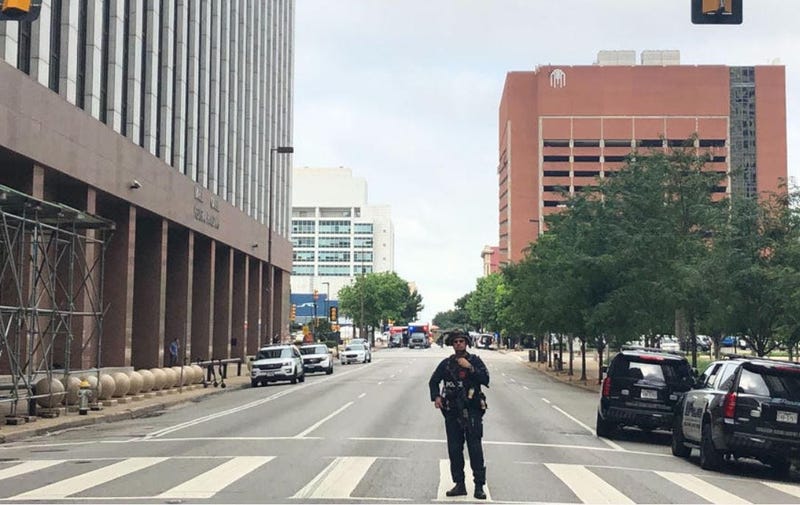 DALLAS (1080 KRLD) - A shooting suspect is in custody after he opened fire near the Earle Cabell Federal Building on Commerce Street in downtown Dallas.

"There has been an exchange of gunfire between a suspect and federal officers" according to Dallas Police. "The suspect was shot and transported to an area hospital. No officers or other citizens injured."

Police surrounded the area and several streets were blocked off.

The FBI says the shooter was identified as 22-year-old Brian Isaack Clyde. He was taken to Baylor Hospital and pronounced dead. Clyde was discharged from the US Army in 2017, the Feds say. They are still trying to determine a motive for the incident.

Streaming live at KRLD.com and on the RADIO.COM app.

Dallas Morning News photographer Tom Fox was at the scene when this happened and says the man came up to the door of the federal building and shot it. He saw him using a rifle and wearing body armour.

Nearby El Centro College is on lockdown.

Dallas Police and the bomb squad are on the scene checking out the suspect's vehicle. Members of the ATF are also helping to investigate.

Several offices in the downtown area have been evacuated as a precaution.

We are getting reports from the public working in the downtown area decscribing the crime scene.

#BREAKING- reports of shots fired during police incident in Downtown Dallas. In area of Federal Courthouse. 1100 block Commerce street.Massive response right now from @DallasPD. Reports from @rjchoppy of friends hiding in closet. We are following it... https://t.co/MmqSRT7v5u https://t.co/8hyLsNEdvi