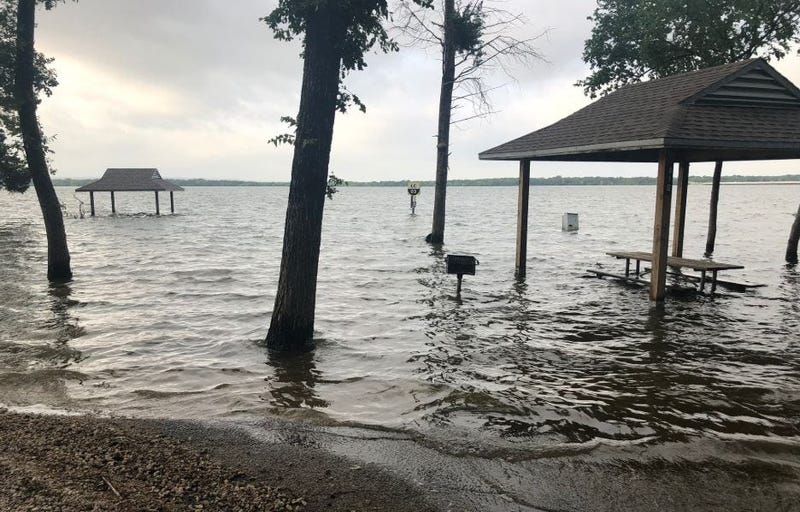 DALLAS (1080 KRLD) - Due to recent heavy rain and flooding, several area lakes will be partially or completely closed this Memorial Day weekend.

The water level at Grapevine Lake is 16 feet above normal, according to the U.S. Army Corps of Engineers. The City of  Grapevine announced this week all of its lake parks and boat ramps are closed for safety reasons.

Several parks and ramps at Lewisville Lake are also closed; including Westlake, Oakland, Hickory Creek, and Camp Cherokee parks. The Big Sandy ramp is closed. However, both boat ramps at Little Elm and Hickory Creek are open.

Joe Pool lake is almost 9 feet above normal, so all boat ramps will be closed. However, if your boat is docked at the marina, you will still be able to take it out on the water.

Some people who had boats docked say the water level at Joe Pool had actually dropped since yesterday.

"Oh yeah, it's decreased a little bit but not much," one man said near a park where was high enough to cover picnic tables. "There ain't much we can do, just have a good time."

The beaches will be open at Joe Pool, but there will be a daily cap of 1,200 vehicles.

"We're limiting the number of people so the experience doesn't drop off for the people who are able to make it out," says Chris Chastain, Grand Prairie's recreation operations supervisor.

"I got out here yesterday. We're doing a graduation party, so I'm cooking for about 100 people," one man said while he cooked outside his RV. He says he was disappointed to find he couldn't take his small boats on the water because the marina was closed.

"There's nothing to do over there, so we just have to make the best of what we've got," he says.

At Lake Lavon, at least 10 parks are closed, as is the Brockdale Boat Ramp. The Stilling Basin Access Point is open. Twin Groves Park is also open.

Every boat ramp at Benbrook Lake is closed. Only one park, Longhorn, is partially open. The marina at Eagle Mountain Lake is open.

To check your local lake levels and see which parks and boat ramps are closed - click here.

One man camping with family says he’s upset he won’t get his boats on the water this weekend, but he’s seen worse flooding at Joe Pool Lake. “I couldn’t get my boat under the bridge 4 years ago. That’s worst I’ve ever seen it. I’ve been coming here since the park opened.” pic.twitter.com/BgOTyDyWz6