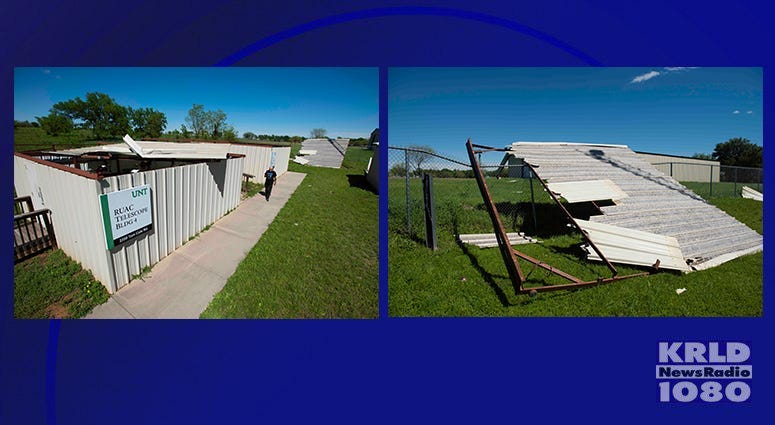 DENTON (1080 KRLD) - While last night's storms didn't produce the softball-sized hail that had been feared, it did cause significant damage at the UNT Rafes Urban Astronomy Center in Denton.

"We came this morning to make sure everything was really nice for our open house coming this Saturday," says Ron Diiulio, astronomy laboratory director at UNT's College of Science, "and found out that we had an open house a little early. All of our roofs had been taken off of all of our observatories."

The high winds sent objects flying quite a distance.

"We had some 150 lb. winches that flew out of the building and went like 1000 yards from the building," says Diiulio, "and then we had roofs that are in the neighbor's property that were intact. It looks like they'd just been thrown like Frisbees."

That, in turn, caused all the telescopes to be exposed to the elements, likely damaging them beyond repair.

"The pressure changed so low that there was even water inside of the sealed optics of the telescopes," saus Diiulio. "We could see fog on the insides of correctors and laying on the mirrors that are covered."

As for the open house, Diiulio says he can't buy a break.

"It seems like every Saturday that we've had an open house for the last several months, it's been cloudy or rainy. So this time they're predicting great weather for Saturday, but we just have to cancel everything until we can make sure we're structurally sound."

Diiulio says he will also have to create alternate astronomy laboratory activities for students and visitors this summer.