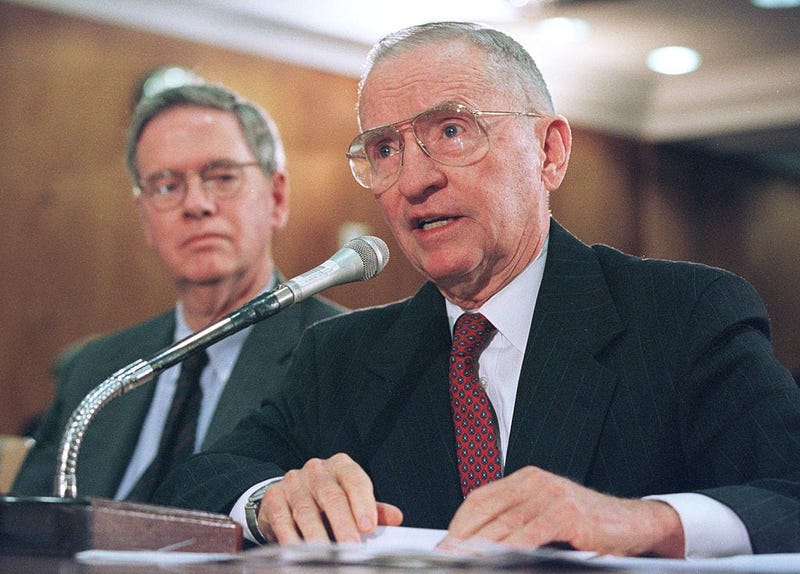 DALLAS (1080 KRLD) - Texas businessman H. Ross Perot has died at the age of 89, a family spokesman has confirmed.

"Ross Perot, the ground-breaking businessman and loving husband, brother, father, and grandfather, passed away early Tuesday at his home in Dallas, surrounded by his devoted family" read a statement from the Perot family.

Born in Texarkana, Texas, he became a salesman for IBM after serving in the United States Navy. In 1962, he founded Electronic Data Systems, a data processing service company, which he later sold to GM for $2.5 billion in 1984.

Perot established Perot Systems in 1988 and was an angel investor for NeXT, a computer company founded by Steve Jobs after he left Apple.

"In business and in life, Ross was a man of integrity and action. A true American patriot and a man of rare vision, principle and deep compassion, he touched the lives of countless people through his unwavering support of the military and veterans and through his charitable endeavors" read a statement from the Perot family.

In 1992, Perot announced his intention to run for president and advocated a balanced budget, an end to the outsourcing of jobs, and the enactment of electronic direct democracy. A June 1992 Gallup poll showed Perot leading a three-way race against President Bush and presumptive Democratic nominee Bill Clinton. Perot briefly withdrew from the race in July, but re-entered the race in early October after he qualified for all 50 state ballots.

In the election, Perot won 18.9% of the popular vote but did not win any electoral votes. Republicans blamed him for Bush's defeat.

"Texas and America have lost a strong patriot. Ross Perot epitomized the entrepreneurial spirit and the American creed" read a statement from George W. Bush. "He gave selflessly of his time and resources to help others in our community, across our country, and around the world. He loved the U.S. military and supported our service members and veterans. Most importantly, he loved his dear wife, children, and grandchildren. Laura and I send our heartfelt condolences to the entire Perot family as they celebrate a full life."

Statement from the Perot Museum in Dallas: "We at the Perot Museum mourn the passing of Ross Perot, a Texas giant, just as we celebrate his life among us. Mr. Perot enlivened the Museum with his generous and caring spirit and served as an example of kindness, compassion, and innovation. His legacy as leader, independent thinker, technological trailblazer and American patriot will endure and continue to serve as inspiration in fulfilling our mission. Our heartfelt thoughts are with the entire Perot family at this time."

“Ross Perot exemplified what it means to be a Texan and an American. Born into extreme poverty, he rose up to become one our nation’s most successful entrepreneurs and an exemplar of the American dream. More importantly, however, Ross Perot was a devoted husband, family man, and servant of God. His charitable work and his support of the United States Military and its veterans will forever be remembered. I ask that all Texans join Cecilia and me in remembering one of the Lone Star State’s greatest sons and keep him and his family in their prayers.”