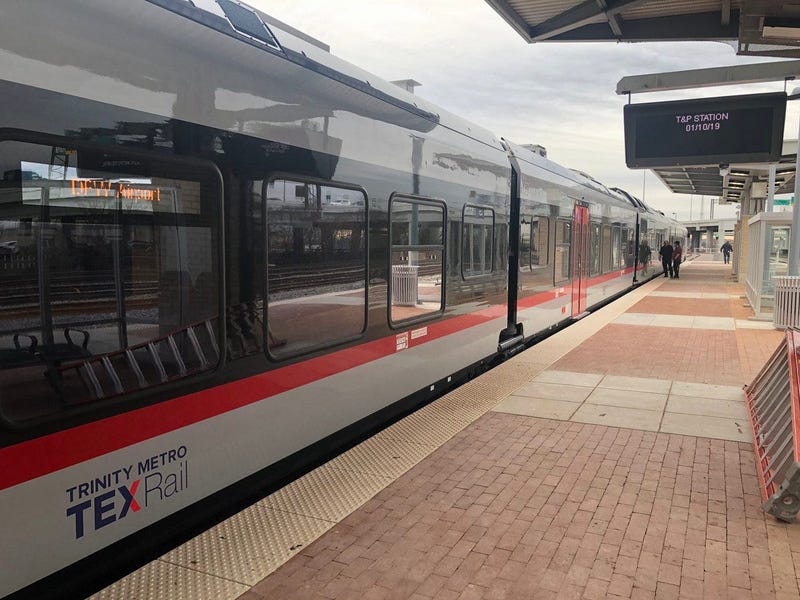 FORT WORTH (1080 KRLD) - Trinity Metro's TEXRail service has started, running commuter rail from Downtown Fort Worth to DFW Airport. Trains will run seven days a week from T&P Station to Terminal B at DFW.

People can ride for free through the end of January, and some people riding Thursday morning say they just wanted to try the service.

"I just wanted to give it a shot," one man said. "It's free the first month."

Another passenger said, "We just want to see where all the stops are."Ambassadors with Downtown Fort Worth Inc were greeting passengers at the ITC to answer questions; at DFW, volunteers were handing out gift cards to passengers.​

"This is beautiful," one woman said after she got on a train at T&P Station. "These are brand new cars."

Trains have cell phone chargers in each row. The trains will be level with platforms, so people with bags will not have to step up to get on the train. Each train also has a "quiet car," where conversations and other noise are discouraged.

"It's very nice, very nice amenities," one passenger said. "I think it's going to be a nice ride."

In Grapevine, developers and the city have broken ground on a $105 million dollar development that will include a six story hotel, plaza with space for 3,500 people and five story rail station.