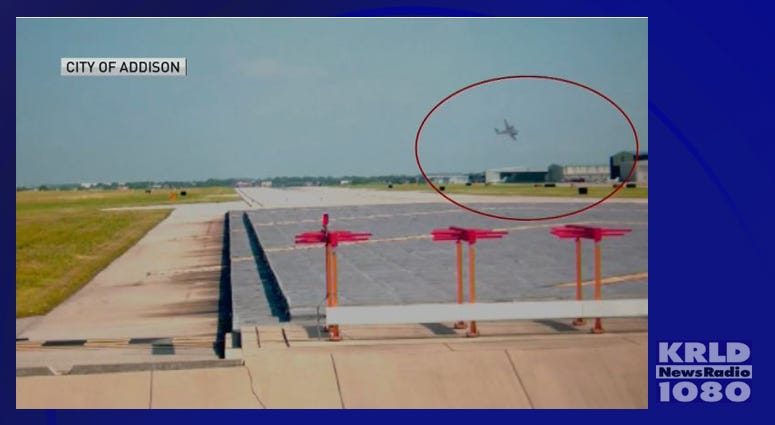 ADDISON (1080 KRLD) - Video has been released showing the final moments before a plane carrying 10 people crashed into a hangar in Addison, killing all on board.

Surveillance and dashboard cameras obtained by NBC 5 show the twin-engine Beechcraft BE-350 King Air rolling down the runway at Addison Municipal Airport.

The preliminary report from the NTSB cites surveillance camera footage showing the plane drifting to the left immediately after takeoff, then rolling to the left before the crash.

One witness told investigators that the plane sounded "more quiet than normal" during takeoff, as if the plane did not have sufficient power.

The cockpit voice recorder captured audio from a crew member commenting about a problem with the left engine about 8 seconds before the crash. Several in-cabin audio alarms were also triggered about 3 seconds before the recording stopped.

This is only the preliminary report on the crash. A final report with a ruling on the likely cause will take several months.

music
Jack White gifts UK busker new guitar in place of smashed acoustic
sports
These 2 wide receivers are outperforming Calvin Johnson in PFF's greatest rookie rankings through Week 6
music
Nicki Minaj celebrates her first year of marriage with a touching photo of her baby boy
music
Ghost planning to release new album in 2021, but only if they can tour
music
SHAED travels the world in 'No Other Way' video
sports
NASCAR helmet artist: 'F–k Bubba Wallace and F–k the BLM Movement'