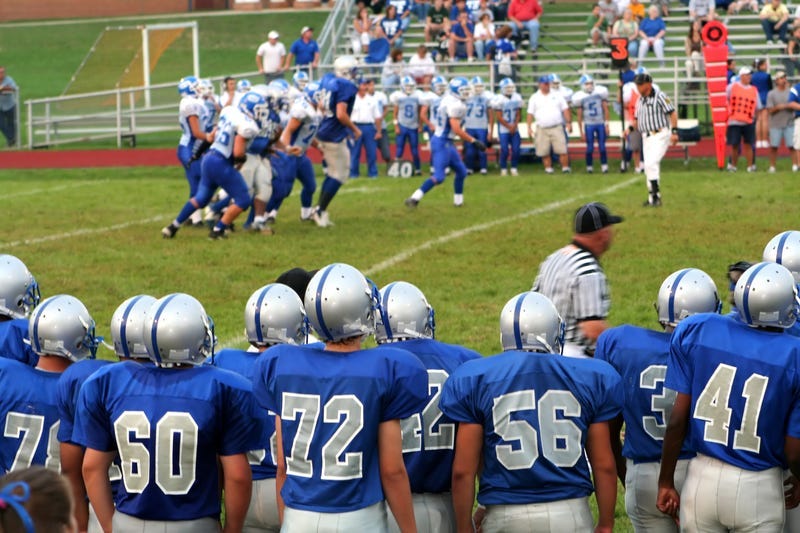 With 5A and 6A allowed to begin play as early as Sept. 24, the smaller schools around the area get the spotlight to themselves one more week.

Some are already in midseason form, clicking on all cylinders as they prepare for district competition. That includes Argyle, which is about to face its playoff nemesis for the fifth time in three seasons.

That matchup - featuring the top two teams in the state in 4AD1 - could be one of the best games of the year, and it tops the Week Four schedule:

NOTE: This week's scheduled game between Bridgeport and Krum has been canceled over COVID-19 concerns at Krum High School.  In addition, Krum has canceled next week's game with Nevada Community.  The two non-district games will not be made up.  At last report, Bridgeport had not scheduled a new opponent for this week.

This is every bit a Five-Star Matchup.  Argyle has defeated La Vega in the regular season each of the last two years, only to fall to the Pirates in the postseason two years in a row.  After beating Celina, 35-21, Argyle, ranked No. 1 in 4AD1, is off to a 3-0 start for the fifth consecutive season.  The Eagles jumped out to a 21-0 lead last week, but HC Todd Rodgers said his team "relaxed" after going up big early.  Argyle can't afford a letdown against No. 2 Waco La Vega, which beat state-ranked Corpus Christi Calallen in a neutral-site game last week, 21-13.  The stingy La Vega defense is allowing ten points per game, and will test Argyle QB CJ Rogers, who threw for three scores and ran for two more last week against Celina.

The tough early schedule continues for Decatur, which lost a heartbreaker to Midlothian Heritage last week, 28-25.  Decatur was stopped at the opponent's one-yard line on the final play of the game.  QB Landon Howell continues to impress for Decatur.  He threw for 241 yards and three TD last week.  Graham comes in off a bye.  They lost to Springtown on Sept. 4, 19-14.

With QB Caleb Welch at the controls, this Lake Worth team is explosive and fun to watch.  Welch threw for 358 yards on 19-of-28 passing with three scores last week, as the Bullfrogs blasted Fort Worth Western Hills, 56-7.  The efficient Lake Worth offense scored touchdowns on all five first-half possessions.  FB Kamron Kimble chipped in with three TDs.  Venus has struggled early.  They lost to Mineral Wells last week, 45-22, and are allowing 42.7 points per game this season.

The Springtown Porcupines are ready to make a lot of noise this season.  After holding a solid Graham team to 14 points in a victory to open September, Springtown shut down a very good Waco Connally squad last week, 17-7.  Springtown comes in on a two-game win streak.  Godley will try to regain its offensive rhythm after a 41-7 loss to 3A Grandview last week.  Godley found the end zone only once after averaging 55.5 points per game in their first two.

Somebody gets into the win column this week.  Alvarado has been shut out in their last two games, including last week's 45-0 loss to Kilgore.  The Indians are averaging 4.8 points per game this season.  After running into COVID-19 issues with their originally-scheduled opponent last week, Kaufman fell to 3-0 Aubrey, 52-21.

This is quite a lengthy trip for a Paris team that comes off a 35-7 loss to defending 4AD2 state champion Texarkana Pleasant Grove.  Now they get a Midlothian Heritage team that has to be considered among the contenders for a title game appearance this year.  Midlothian Heritage got a major scare last week, needing a goal-line stop on the final play to survive Decatur, 28-25.  Sr. RB Cullen Stone has put up all-state numbers so far this season.  He ran for 164 yards last week and scored the game-winning TD with :57 left.

Stephenville comes in on a two-game losing streak after falling to Salado, 61-45.  Undefeated Melissa continues to impress.  They dominated a very good 3A opponent in Pottsboro last week, 51-17.  QB Sam Fennegan was 12-of-14 for 174 yards and three touchdowns, while Carlos Branch had two TD receptions and added an interception return for a score.  Melissa is averaging 47 points per game this season, and should be prolific again this week against a Stephenville defense that has been vulnerable.

Caddo Mills has been lighting up the scoreboard.  After last week's 57-47 win over Canton, Caddo Mills is averaging 53.3 points per game.  Waxahachie Life picked up their first win last week, 21-14, over Brownsboro.  QB Detyrian McCoy threw for 291 yards and a score.

The district opener brings a fresh start for two schools that have struggled early.  Castleberry comes off a 58-29 loss to Jacksboro.  Benbrook dropped a 34-28 decision to Wichita Falls Hirschi.

This is another league opener in the complicated district that is 6-4A Div. 1.  These schools reportedly will play a zone format, so every game is important in the push for the playoffs.  Dunbar opened with a 20-0 win over Dallas Life Oak Cliff.  QB Dorian Carr ran for 169 yards and also had a TD pass.  Eastern Hills rolled to a 36-0 win over Fort Worth Diamond Hill-Jarvis in their opener.  Freshman QB Davionte Collins was spectacular, running for three touchdowns last week.

Both these schools have struggled early and are hoping to kick off district play on a positive note.  Diamond Hill-Jarvis lost 36-0 to FW Eastern Hills last week, while Western Hills was routed by Lake Worth, 56-7.  Western Hills has been outscored 115-14 in their two games this season.

This is another district opener, and Kennedale appears to be the class of 6-4A Div. 1.  After trailing all night last week against Sunnyvale, Kennedale got a 22-yard field goal from Jr. K Aidan Birr at the final gun to win 28-27.  Kennedale's final drive was set up when Kameron Sallis recovered a late Sunnyvale fumble.  Carter-Riverside snapped a 27-game losing skid that dated to 2017.  They defeated Atlas Home School, 34-8.  QB Marvelle Jacobs rushed for 144 yards, with two TD on the ground and another through the air.

After dealing with the COVID-19 restrictions laid out by Dallas County officials, Carrollton Ranchview is finally set to take the field for the first time this season.  It will be their only tuneup before district play begins next week.  It's been a frustrating start for Sunnyvale, which lost to Kennedale, 28-27, last week on a field goal on the final play.  QB Max McAda threw for 197 yards and two TD, while WR Noah McDill had a breakout game with six catches for 181 yards and touchdowns of 75 and 81 yards.  After going 12-1 in 2019, winless Sunnyvale is allowing 44 points per game.

Terrell comes off a 51-42 shootout loss to Tyler Chapel Hill last week.  QB Kanye Nix threw for 184 yards and three touchdowns.  Aubrey is among the schools that have been extremely impressive in the early going.  After last week's 52-21 win over Kaufman, Aubrey has outscored its opponents, 133-31.  The Aubrey ground game is rock solid.  They ran for 505 yards last week.  RB Braylon Colgrove contributed 176 yards rushing and three scores.

Bridgeport comes in off a 23-6 loss to 3-0 Hillsboro.  Krum dropped a tough one to Farmersville last week, 33-31.  RB Devrin Brown ran for 167 yards, while backfield mate Taylor Kern rushed for 104 yards and two TD.

Brock has shown time and again it will take on all comers as it fine-tunes for district play.  The state's top-ranked team in 3AD1 steps up in class this week against 4A Iowa Park, which defeated Burkburnett last week, 49-12.  Brock should be fresh for this one.  They were off last week, following a 66-7 win over 4A Nevada Community on Sept. 4.  Brock is averaging 61.5 points per game this season, while allowing only seven per game.

Mineral Wells picked up its first win of the season last week, defeating 0-3 Venus, 45-22.  Sanger will be a major test for the Rams.  They beat 3A Howe last week, 35-6.  Sanger QB Rylan Smart threw for 213 yards and two scores.  RB Tallyn Welborn ran for 112 and three touchdowns.

Just like Brock, the Grandview Zebras are not afraid to go toe-to-toe with the big boys.  4A Glen Rose shut down Fort Stockton last week, 40-0.  Grandview was extremely impressive last week in a 41-7 win over a Godley team that came in averaging more than 55 points per game.  In their first meeting since 2013, Grandview outgained Godley, 516-173.  Sr. QB Dane Jentsch threw for 283 yards and six touchdowns, while Soph. WR Kason English caught seven passes for 157 yards and two scores.

This one features two schools off to strong starts.  Paradise comes off a bye week.  They beat Nocona on Sept. 4, 57-6.  Millsap picked up their third straight win over 2A DeLeon, 27-20.

This one should be worth the price of admission.  Pilot Point was off last week.  In their last time out, they defeated 4A Fort Worth Castleberry, 49-35.  Gunter was back in form last week with a 42-10 win over Whitesboro.

Maypearl already has wins over 4A Ferris and 4A Venus this season.  Now, they look to remain unbeaten against 2A Trenton.  Maypearl comes off a 17-7 win over Clifton.  Trenton returns after a week off.  Their wins this season are over 0-3 Detroit and 0-3 Maud.

Groesbeck's Goats had their two-game win streak snapped last week, when they fell to Little River Academy, 45-0.  Groesbeck has recorded wins over Corsicana Mildred and Rice this season.  Palmer stayed unbeaten last week with a 27-26 double overtime win over 2A Bosqueville.

These perennial playoff contenders are off to slow starts in 2020.  Malakoff looks to rebound from a 56-32 loss to Cedar Hill Trinity last week.  West Rusk fell to 3-0 Mineola last week, 36-14.

3A Corsicana Mildred is the larger school here, but 2A Italy has the firepower to give Mildred all it can handle.  Corsicana Mildred extended its win streak to two last week with an 8-7 squeaker over 2A Kerens.  Mildred comes into this week with a winning record despite scoring a total of 32 points in its first three games.  Italy's Gladiators took to take down a 3A opponent for the second straight week.  They beat Rice last week, 35-7.

Kerens lost to 3A Corsicana Mildred last week, 8-7.  Rice is still searching for its first victory of the season after a 35-7 loss to 2A Italy.  Rice is averaging 9.7 points per game.

After opening the year with losses to Munday and Bartlett, Ranger is back after a week off.  This is the first game for Itasca since Aug. 28, when they lost to Wortham.  The Wampus Cats had a scheduled bye last week, and lost a game to COVID-19 the week before.

This is what we call a "measuring stick" game for Dawson.  After last week's 41-0 win over Wortham, Dawson is averaging 48 points per game in their last two.  They hope to continue that trend against Bremond, which won three consecutive state titles from 2014-2016, and is back in the Dave Campbell's Texas Football state top ten at No. 8 in 2AD2.  Bremond has also shown early offensive firepower.  After beating Milano, 43-0, for their second straight win, the Tigers are averaging 50.5 points per game over the last two.  ​