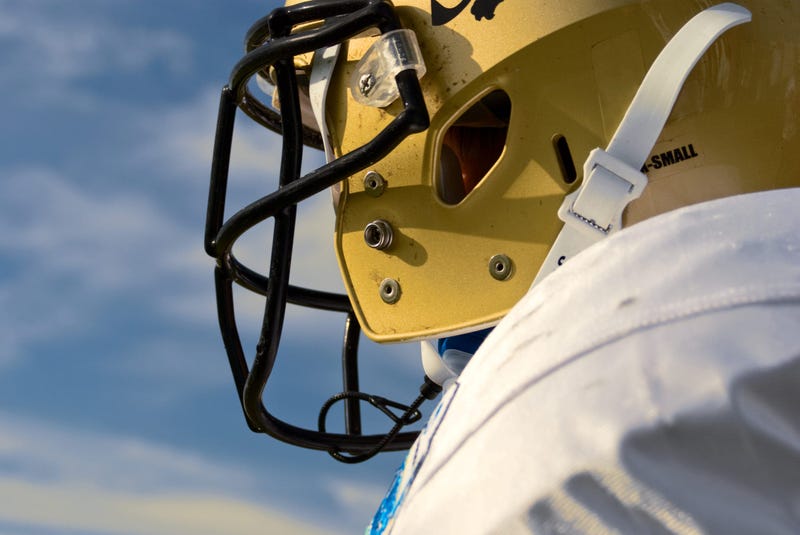 We still have at least a couple of weeks before the larger schools around the area (6A and 5A) see real game action, but among those who started their football seasons on time, there have been standouts.

Argyle has ascended to the top spot in the state rankings in 4AD1, while Midlothian Heritage, Melissa and Aubrey also have looked really strong in the early going.

We look at more non-district tuneups on the schedule in Week Three:

UPDATE:  Nevada Community will now play at Longview Spring Hill on Friday.  Community's original opponent, Paris North Lamar, canceled this week's game (and next week's game with Anna) due to COVID-19 concerns.  Also, Kaufman High School said it canceled this Friday's game with Henderson as a result of the number of COVID-19 cases reported in the Henderson ISD.  Kaufman will be off this week.

Midlothian Heritage is off to another hot start after dispatching fellow state-ranked opponent Lindale last week, 28-21.  For the third consecutive week, Heritage will face an opponent that was rescheduled because of COVID-19.  QB Daelin Rader had 190 total yards and a TD pass in the win over Lindale, while RB Cullen Stone ran for 83 yards and 2 TD.  Midlothian Heritage remained at No. 9 in 4AD1 in the official rankings from Dave Campbell's Texas Football.  Decatur responded to its 47-point opening week loss to Argyle by blasting Alvarado, 47-0.  Soph. QB Preston Escobar had a breakout game for Decatur, racking up 313 total yards, three TD passes and a TD on the ground.

After beating Whitesboro, 26-3, Aubrey is off to a 2-0 start for the first time since 2010.  The Aubrey defense has been stout, allowing just ten total points in their first two games.  Gainesville comes off a 14-0 win over Vernon.

Western Hills will try to rebound this week, after dropping their opener to West, 59-7.  Lake Worth has been involved in a couple of early shootouts.  The Bullfrogs lost to Sanger last week, 47-35.  Lake Worth is averaging 41.0 points per game.  QB Caleb Welch lit it up in last week's loss, throwing for 415 yards and four touchdowns.  WR Mark Fulkerson is Welch's go-to target.  He had 12 receptions last week for 236 yards and three scores.  Lake Worth is a heavy favorite in this one.

This week brings another tough test for Springtown.  The Porcupines last week defeated state-ranked Graham, 19-14.  Waco Connally gave then-4AD1 No. 1 Waco La Vega all it could handle, losing a 13-10 decision.  Connally, which is in the state's top ten in 4AD2, features a bruising rushing attack led by Kavian Gaither.  He ran for 147 yards last week against a talented La Vega defense.  Waco Connally is ranked No. 7 in 4AD1 by DCTF.

Benbrook is still searching for its first victory of the season, after falling to Ferris, 20-17.  Hirschi comes off a 28-13 win over Anna.

Kilgore comes off an impressive 26-7 win over former 5A Terrell.  Alvarado is trying to figure things out after an 0-2 start, including last week's loss to Decatur, 47-0.

Life comes off a 48-20 loss to Athens, which ran for 357 yards last week.  Brownsboro fell to Athens in their opener on Aug. 28.  They did not play last week, after having two scheduled opponents drop out over COVID-19 concerns.

Castleberry dropped its opener to Pilot Point, 49-35.  This larger Fort Worth opponent will be challenged by 3A Jacksboro, which fell to Boyd last week, 21-16.

Larger school Dunbar will be favored in the season opener for both schools.

Season opener for both schools.

The tough early schedule continues for Sunnyvale, which lost to Melissa last week, 44-28.  HC John Settle saw bright spots in the defeat, as RB Obi Arinze ran for 216 yards and a TD, while Jr. Max McAda threw a TD pass and had two touchdown receptions against Melissa.  The Sunnyvale defense forced five turnovers.  This is the season opener for Kennedale, which looks to roll out its perennial powerful rushing attack.

As Van Alstyne travels just down 75 to face its neighbor, they come off a 54-24 win over Bonham.  Van Alstyne bounced back last week after dropping the opener to Gunter.  Anna's Coyotes seek their first win of the season.  They fell to Wichita Falls Hirschi last week, 28-13.

The Argyle Eagles have been running on all cylinders.  They come off a 52-41 win over defending 4AD2 state champion Texarkana Pleasant Grove, and the DCTF voters were impressed enough to bump Argyle ahead of Waco La Vega into the No. 1 spot in the 4AD1 state rankings.  QB CJ Rogers threw for 252 yards and five TD last week.  WR Cole Kirkpatrick caught six passes for 153 yards and three scores.  Argyle comes in riding a 48-game regular season win streak.  Celina continues a tough non-district schedule.  The Bobcats dropped a 10-7 decision to state-ranked Paris last week.

As usual, Henderson played Gilmer to the wire in their annual showdown, losing 22-20.  Henderson defeated Texarkana Liberty-Eylau in their opener on Aug. 28.  Kaufman looks to get into the win column for the first time this year.  They fell to Tyler Chapel Hill last week, 38-33.

This battle of the Cardinals might be the area's most-intriguing matchup of the week.  Pottsboro comes in off a 34-21 win over 3AD2 No. 1 Gunter.  They have taken down Gunter two consecutive years.  QB Braden Plyler accounted for four TDs last week, while RB Jett Carroll stepped in with 126 yards and a score.  Pottsboro, ranked No. 3 in 3AD1, now steps up in class against 4A Melissa, which beat Sunnyvale, 44-28.  QB Sam Fennegan, who transferred from Dallas Woodrow Wilson, threw for 424 yards and five TD last week.  Melissa's Damon Youngblood caught a TD pass and also had an interception return for a TD.

Hillsboro is off to a strong start.  After beating Krum 27-0 last week, they have allowed a total of 14 points in their first two games.  Bridgeport's Bulls got into the win column last week with a 23-14 win over Bowie.

One week after snapping a 26-game losing streak in the opener, Krum was shut out by Hillsboro, 27-0.  The Bobcats defense forced three turnovers last week.  Farmersville was off last week.  They lost to Emory Rains in the opener on Aug. 28.

Sanger has already eclipsed their win total from last season, when they went 1-9.  Sanger comes off a 49-35 win over Lake Worth.  They are favored to move to 3-0 against 3A Howe, which lost to Bells last week, 47-24.

This game also gets consideration for the best matchup of the week.  Two-time defending 3AD1 state champ Grandview steps up in class against a larger opponent in Godley, which has lit up the scoreboard so far this season.  After drilling Mineral Wells, 61-20, Godley is averaging 55.5 points per game.  Grandview's Zebras were impressive in beating 4A Salado, 21-7.  RB Gavin Leftwich ran for 195 yards last week.  Grandview LB Matt Lehnhardt returned a fumble 35 yards for a TD, as the defense held Salado to 113 total yards.  Grandview is ranked No. 2 (behind Brock) in 3AD1.

Somebody breaks into the win column this week.  Community comes off a 66-7 loss to 3AD1 No. 1 Brock.  QB Paul Testa hit Jonathan Norris with an 80-yard strike for their only score last week.  North Lamar comes in off a 65-19 loss to Canton.

Quinlan Ford is off to a hot start after going 4-6 last season.  They beat Blue Ridge last week, 49-7.  Ferris is a team on the rise, after going 2-9 last year.  They come off a 20-17 win over Benbrook.  Sr. QB Nate Aguinaga ran for two TD and threw for one last week.

Boyd is favored to remain unbeaten in this one.  They face 2A Tolar this week, after a 21-16 win over Jacksboro.  Tolar comes off a 41-25 loss to Early.

Ponder comes off a double overtime heartbreaker against Wichita Falls City View.  Ponder lost 36-34 when Chase Taylor was stopped on a two-point conversion attempt after he found the end zone in the second extra period.  Nocona has struggled early.  They lost to Paradise last week, 57-6.

Gunter looks to bounce back after falling to Pottsboro for the second straight year.  Last week's final was 34-21.  The top three teams in 3AD2 - including No. 1 Gunter - all lost last week.  Gunter fell a notch to No. 2 in the DCTF state rankings.  Whitesboro comes off a 26-3 loss to Aubrey.

Valley View returns to action after a week off.  They lost their opener to Ponder on Aug. 28.  Bells stayed unbeaten last week with a 47-24 win over Howe.

Palmer is favored to stay unbeaten as it takes on a smaller opponent in 2A Bosqueville.  Palmer defeated Grand Saline last week, 46-20.  After being outscored 30-0 in the first period last week, Bosqueville fell to Holland, 62-33.

Italy's Gladiators have looked rock-solid on both sides of the ball through two games.  They beat Chilton last week, 46-0.  Italy has outscored its first two opponents by a margin of 69-7.  Rice looks to rebound after a 39-14 loss to Groesbeck.

Rio Vista is on an early roll after being Granger, 35-14.  Independent Cross Roads suffered a 39-0 loss to Waco Texas Wind last week.